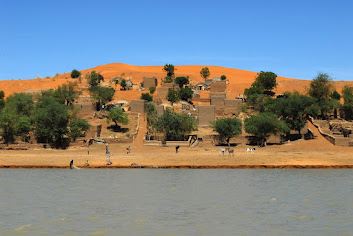 The Niger River rises in the Guinea highlands, about 150 miles (240 km) from the Atlantic Coast of Africa. But instead of heading directly toward the sea it flows into the interior of the continent, skirting the southern Sahara in a vast 2,600 mile (4,000 km) arc before finally entering the sea in Nigeria. When it flows down from the mountains it enters a very flat region where it drops only about 5 cm in each kilometer, a gradient of 1:20,000. So it spreads out into what is called the Interior Delta. This is a vast region of backwaters, ponds and marshes bordering the dry lands called the Sahel. It is a remarkably rich ecosystem and drew human inhabitants from a very early time. 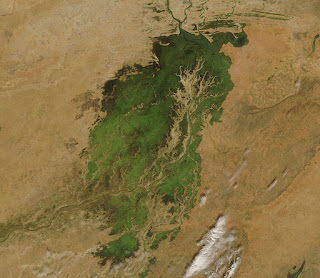 The Inland Delta from space

Like the Nile, the Niger floods every year at about the same time, bringing a surge of water to the delta that sustains it through the rest of the year. But unlike the Nile, the Niger is highly unpredictable; years when the flow of water is close to the average are rather rare. Instead, some years there is a vast flood that inundates most of delta, while in other years there is not much of a flood at all. This meant that to thrive in the delta, people had to be adaptable and develop strategies to feed themselves whatever the river happened to do. 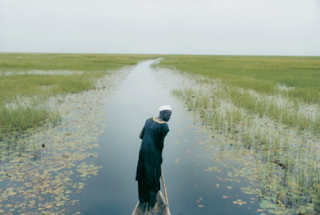 Three kinds of people lived around the delta. Cattle herders of the Sahel came there during the dry season, trading with other people and pasturing their herds on the drying marshes left after the floods had receded. The delta is full of fish, so there were many fishermen. There were also farmers whose main crop was African rice, which they were probably the first to domesticate. You might think that the best strategy would be for each community to diversify and include some herders, some fishers, and some farmers, so as to feed itself from whichever system worked best in that year. But in fact these activities are carried out by different communities that think of themselves as forming ethnic groups completely distinct from the others. John Reader:

In each of the delta's three basic subsistence strategies (farming, herding, and fishing), only deep, sharply focused knowledge of the effects and potential of prevailing environmental circumstances could ensure long-term adaptive success — in other words, specialization. But concentrating on a single highly specialized strategy in unpredictable conditions is also a recipe for frequent and disastrous failure. Diversification — spreading the risk of failure across a wider range of options — would be a better strategy but, since success with any food-production system called for a high degree of specialization, no single group could hold and exercise the necessary degree of knowledge in more than one activity. The demand for diversification is incompatible with the requirements of specialization, yet each is fundamental to survival.

The paradox was resolved in the inland Niger delta by the development of special relaitonships between specialists. These relationships allowed each group to pursue its occupation exclusively, while sharing bonds of mutual obligation. 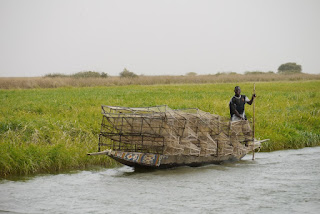 Here, also from Reader, is one example of the complexity dwellers in the delta had to manage:

In the most productive basins of the delta, the cultivated West Africaqn rice (O. glaberrima) has successfully held off the diffusion of the higher-yielding Asian varieties, largely because of its greater genetic variability and capacity to produce a crop under a wide range of conditions. More than 41 distinct varieties of O. glaberrima are known, among which some will survive variations in water depth from one to three meters. The delta's rice growing specialists, the Marka people, sow a mixture of varieties in the same field, each with different growing periods (from 90 to 210 days), varying tolerance to soil porosity and pH, and sensitivity to the timing of the flood. Their fields are long and narrow, cutting across several soil types along a progression of potential flood levels. The multiple sowings are made at intervals of several days or weeks The procedure and timing of Marka rice cultivation are determined to some extent by intricate astrological observations; this and other aspects of their activities are kept secret and not freely shared outside the Marka community.

I find this fascinating. There was no overarching authority in the delta; each ethnic community was entirely independent of the others, and each was also divided into clans and villages with no supreme leadership. They survived in an environment that demanded cooperation because each clan of farmers had a time-honored bond with at least one clan of fishers and another of herders, strong enough that that they would accept terrible terms of trade in years when their traditional partners were in tough straits. Presumably this doesn't work well all the time, since nothing does, but it has worked well enough to have lasted at least 2,500 years. Even under the empires that dominated this area in medieval and modern times (Mali, Songhai) the warlords mostly left this system alone and did not try to interfere. 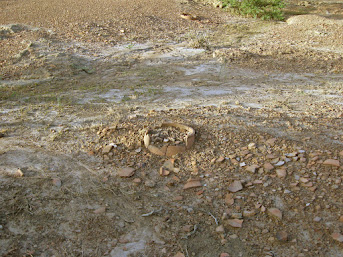 Pottery on the surface of Djenné-Djenno

In this rich environment, full of food and people, arose one of Africa's first cities: Djenné-Djenno. That, at least, is how UNESCO spells it; others prefer Jenne-Jeno. The name means "ancient Djenné", and it is indeed just a few miles from the modern city of Djenné. Today the old city is a great mound 10 meters tall, covering about 30 hectares (75 acres). It is surrounded by at least 30 smaller mounds that seem to have been occupied at the same time. 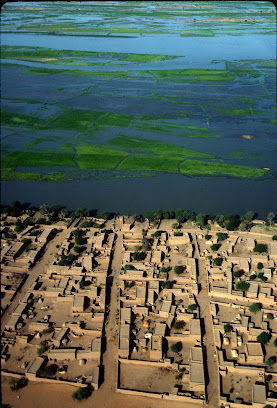 A modern city of the inner delta

Serious archaeology at Djenné-Djenno began in 1977. The excavators dug only four trenches, the biggest 3x4 meters, only one of which penetrated to the lower levels of the mound, and proceeded to publish a complete history of the site. Other archaeologists were a little appalled but also fascinated, because the lower levels of Djenné-Djenno radiocarbon dated to around 250 BC. That was about a thousand years before the first written evidence of cities in west Africa, provided by Muslim traders who followed the caravan routes across the Sahara. Muslim writers gave the impression that these cities (notably Timbuktu) had grown up fairly recently because of that trade, and in the absence of any other evidence their view held the field.

But Djenné-Djenno seems to have been a large settlement early in its history, and by 600 AD it had reached its maximum extent. A reasonable estimate, based on 19th-century towns in the inner delta, would be that it had around 27,000 inhabitants. Djenné-Djenno thrived down to around 900 AD, then slowly faded at its sister city grew; it was abandoned by 1400 AD. 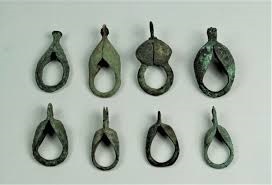 Archaeology has continued at the site but only a small portion has yet been explored. Archaeologists feel certain, though, that the city never had any sort of citadel or monumental core. There are no larger-than-average buildings, and no evidence that any part of the city was ever wealthier than any other. So far as anyone can tell, it was probably governed in the same way the rural areas of the Inner Delta were governed, by clan elders constantly negotiating with other clan elders. There must have been added complexity because some inhabitants were not farmers, fishers, or herders, but potters, smiths, and other craftsmen. Perhaps they formed their own clans and their own relationships with food producers.

Iron production was especially strong at the ancient city, making it the second oldest known center of Sub-Saharan iron making. Deposits of slag around the town show iron was made on a large scale. There is iron ore pretty much everywhere in Africa – that's why the soil is so red – and the real problem with iron manufacture was always wood for making charcoal. It seems that the problem was solved in the Inner Delta, probably by setting aside certain wooded areas to be cut every 10 to 15 years for burnable wood.

Toward the end of Djenné-Djenno 's history, around the year 1000, people began making the terracotta figurines that still fascinate collectors; this one is in the Met.

Another interesting discovery is that Djenné-Djenno was a trading center from an early date, since imported goods such as copper and exotic stones are fairly common in all levels of the mound. Pottery from Djenné-Djenno has been found at Saharan oases.  Perhaps they traded with the Roman Empire. 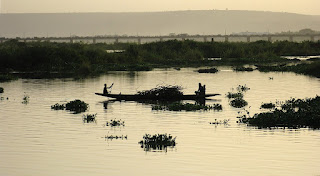 I learned about Djenné-Djenno from an amazing book, Africa: A Biography of a Continent (1997) by British journalist John Reader. The thing looks like it would be a pseudo-intellectual mess, but no; much of it is brilliant. I have already learned a huge amount and I am only a third of the way through.
Posted by John at 9:38 PM

Fascinating post. Characteristically, I'm fascinated by the statelessness of this society and the rule by clan elders. It would be grand, I think, to learn more about how that works.