Warrior Women of the Don 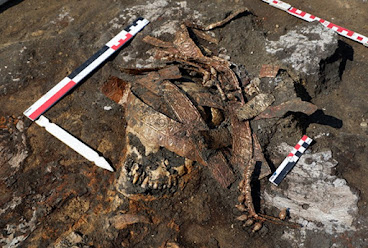 Since I couldn't do what I planned to do this weekend, I got back to my long-term project of reposting all the good stuff from my old web site onto this blog. I had an article there about the ancient Amazons and the female warriors of the steppes. I will be reposting that soon, but I noticed that it was out of date and didn't want to put it back up in that form. So I started searching around for newer stuff to include. In the course of this I stumbled on a remarkable Russian excavation that I had never heard of before.
One of the long-known groups of ancient Scythian burial mounds is along the Don River in the Ostrogozhsky district, part of the Voronezh region of western Russia. Now this area is caught up on the war, full of Russian machinery and under fire from HIMARS. But back in the comparatively peaceful year 2019 Russian archaeologists were still working at the mound complex, and they dug into a mound designated Maiden V. The mound was about 40m across the just over a meter tall.

Within it they found a single complex tomb, with stains left by the beams of a large wooden chamber. The tomb had been robbed, and the robber's entrance tunnel could be clearly seen. The first two bodies they found had been disturbed, their bones scattered. But enough remained to identify the occupants as two women, one 20 to 25 years old and the second 12-13 years old. The objects found among the bones included:

More than 30 iron arrowheads, an iron hook shaped like a bird, elements of horse harness, iron hooks for hanging a bridle, iron knives, fragments of molded vessels, and numerous animal bones . . . . In addition, a broken black-gloss aryballic lekythos with a red-figured palmetto was found in the filling of the robbery passage. These vessels date back to the second or third quarter of the 4th c. BC. 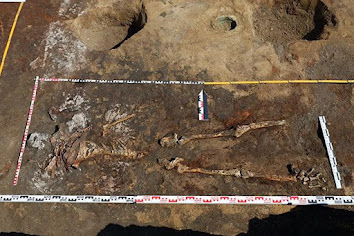 Tomb of the Older Woman

So that was pretty cool; too bad the graves were robbed, but enough survived to date the burial securely, and to hint that these were unusual women. As the work was extended to the rest of the mound, it was discovered that the tomb contained two other internments, and these had not been robbed.

The deceased were laid on wooden beds covered with grass bedding, their heads on earthen "cushions" also covered with grass. The first woman (individual no. 1; 40-50 years old) was buried in an extended position on her back along the southern wall and oriented to the west. Her head was decorated with a well-preserved headdress, consisting of stamped gold plates with floral ornaments, as well as rims with amphora-shaped pendants.

An iron dagger was found nearby, although not close enough to make it a definite part of this woman's burial. The headdress is shown at the top of the post as it was excavated. 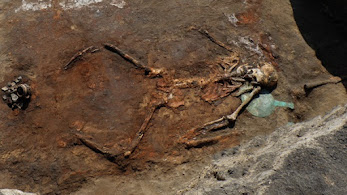 Warrior woman in the Rider Posture

The second woman (individual no. 2; 30-35 years old) was buried along the western wall with her head to the south in the so-called "rider posture." A bronze mirror was laid under her left shoulder, along the left half of her body were two spears. On the left hand was a bracelet made of glass beads. Two vessels were found at the feet of the buried woman: a molded incense burner and a black-glazed one-handed kantharos, the production of which can be dated to the second quarter of the 4th century BC. BC. Thus, it is possible to date the burial to the second half of the 4th c. BC.

So here we have four women buried in a single tomb, which means within a few years of each other at most and possibly at the same time. Considering how many Scythian tombs have been dug, we know remarkably little about who was buried in them and why, so we can't say how they were connected. Maybe when peace is restored we will get some genetic data on these women, because the best guess is that they were from a single family.

At least two of these women were buried with weapons in the form of iron-tipped arrows, and one also had spears. The excavation director, Valerii Guliaev of the Russian Academy of Sciences, told reporters “We can certainly say that these two women were horse warriors.” And that seems likely. Guliaev also said he thinks all four were warriors, but he was careful to qualify that as his opinion. He also said nothing about how the women were related. But all the news stories about this site say that all four of the women were armed, and Haaretz put a headline on this story about "Three generations of Amazons." Which is even possible, but getting far ahead of the evidence. 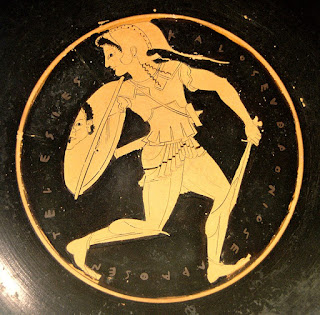 Notice that the more intact warrior burial is not strictly masculine. She also had a bronze mirror, which is a signal of femininity in this culture, and feminine jewelry. This is interesting because among some cultures where women take on male roles (such as modern Albania) they assume a lifelong masculine persona, dressing and acting in entirely male ways. This does not seem to be true of the Scythians and Sarmatians. The Greeks portrayed them with feminine hairstyles and sometimes showed them dressed differently from men. Of course that might have been a Greek fantasy, but the evidence from Maiden V suggests it might not have been.

The more digging we do on the Black Sea steppes, the more evidence we find that the warrior women the Greeks called Amazons were something much more than a myth.