The Destruction of the Georgia Guidestones 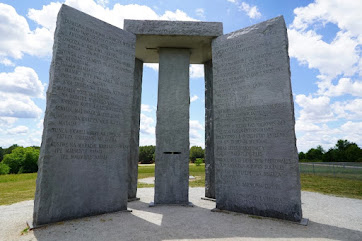 The Georgia Guidestones were blown up early Wednesday morning by persons unknown. The destruction of these granite slabs has long been sought by various right-wing cranks who considered them satanic or otherwise evil. Alex Jones said they were a sign of a globalist plot to enslave humanity. Fringe gubernatorial candidate Kandice Taylor made their destruction a big part of her platform. Not a major loss in the grand scheme of things, but still a despicable act of intolerance; Alex Tabarrok compared the vandals to the Taliban.

The Georgia Bureau of Investigation said “unknown individuals” detonated an explosive device around 4 a.m., destroying a large portion of the Georgia Guidestones. The structure, which has been dubbed “America’s Stonehenge,” originally consisted of four 19-foot granite slabs, a center stone and a smaller block capping the top. Video footage released by law enforcement shows a car leaving the scene shortly after the blast, although the GBI did not specify whether the driver was connected to the incident. Later in the day, authorities demolished the whole monument, citing safety reasons.

The enigma of the Guidestones, located in Elberton, a city roughly 110 miles east of Atlanta that calls itself “the Granite Capital of the World,” can be traced to the late 1970s. Around that time, a man identified as R.C. Christian commissioned the project on behalf of a group of out-of-state Americans who wanted to remain anonymousp. People who knew Christian’s real identity took an oath of secrecy that has not been broken.

The Guidestones’ funders wanted to make “a moralistic appeal” to humanity, according to the trade group, and etched 10 guiding principles onto the stones. The multilingual manual for humanity has been a popular spot for visitors over the past four decades.

The instructions, repeated in eight languages on the four upright slabs, are largely uncontroversial. They urge humanity to protect nature and care for fellow citizens. But two entries raised eyebrows: They called for the world’s population to be capped at 500 million and encouraged reproduction to improve “fitness and diversity.”

Seems to me there are some serious questions about this act. Why do the police have video of the destruction? And why were the remains so quickly disposed of? If safety was the issue, why not put up a fence?

Here, via wikipedia, are the ten guiding principles that were carved on the stones:

While I'm on the subject, I've long had a fantasy of creating some mysterious object, like, say, a stone carved with a message about Jesus and aliens, of course broken and so imcomplete, and then hiding it somewhere and seeing what happens.

Why do the police have video of the destruction? And why were the remains so quickly disposed of? If safety was the issue, why not put up a fence?

I'm guessing a lot of the Georgia police likewise believe it was part of the Satanic Conspiracy.