A Fifth-Century Anglo-Saxon Cemetery, with Warriors 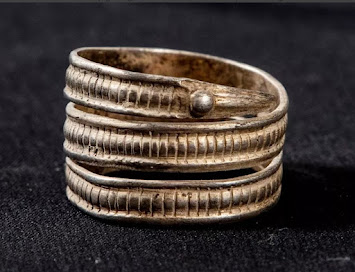 Both the English and Welsh traditions always maintained that Anglo-Saxons came to Britain as soldiers, either mercenaries or invaders, and that however they arrived they were soon waging a war of conquest.

But until recently the archaeology seemed to be saying something rather different. I summed up the state of knowledge here back in 2103:

The earliest Saxon cemeteries, dating to the mid fifth century and found in the Thames Valley and Essex, seem to be of ordinary farmers. These are poor people, buried without weapons. Their settlements are undefended, and they seem to have existed side-by-side with equally undefended settlements of ordinary Romano-British farmers. There is also considerable evidence for contact between the two peoples: hundreds of British place names survived, the genetics seems to show substantial intermarriage, many old community boundaries were maintained. The culture we call Anglo-Saxon seems to have emerged gradually from the mixing of British and barbarian elements, and not until nearly a century later do we have much evidence for Anglo-Saxon warriors, especially warrior aristocrats.

There were always problems with this model; for starters, what peasant people has ever peacefully welcomed several thousand interlopers from overseas? And if the violent conflict between Saxons and Celts actually developed very gradually over a century or more, why did all of our written sources say something completely different? 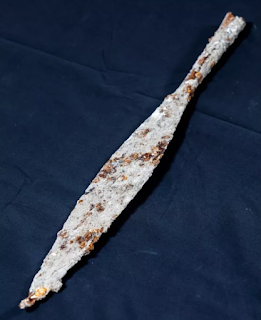 In recent years archaeological evidence of early Anglo-Saxon warriors has begun to emerge, and new discoveries at a site called Wendover were announced this week:

A wealthy pagan burial ground, dating from the first years of the Anglo-Saxon invasion of Britain during the fifth century A.D., has been uncovered near London ahead of a high-speed rail project, known as High Speed 2 (HS2). The new discoveries, which include more than 100 skeletons, are among the most important archaeological finds made along the HS2 route. . . .

As well as the human remains, which include a young man who appears to have been killed by a spear, the archaeologists have unearthed the rich grave goods interred with them, such as brooches and rings of silver and other metals decorated with gold. 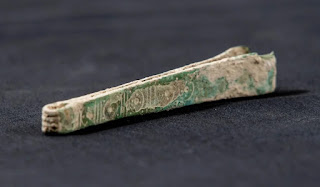 Personal grooming kits with tweezers and spoons for removing ear-wax were also found in many of the graves; and some of the objects, such as amber beads and glass drinking vessels, were probably brought to Britain from continental Europe. The high-status and expensive grave goods suggest that whoever was buried at the site, which looks out over the vast and flat lands of Aylesbury Vale to the north, belonged to a wealthy Anglo-Saxon community. It may even have been the final resting place of a single affluent landowning family over several generations. . . .

The Anglo-Saxons buried at Wendover were definitely armed — the grave goods included an iron sword, 15 spearheads and the remains of seven shields, Wood said. A metal point, probably the tip of a spear, was found in the spinal bones of one man and seems to have killed him; reconstructions suggest it came from a blow to the front. 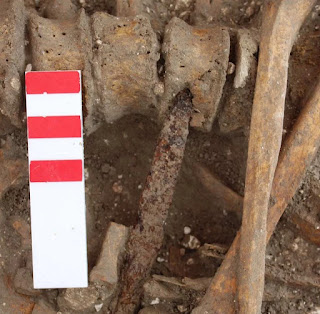 However, the young man killed by a spear (above) is the only victim of violence identified so far, which makes this a fairly peaceful group of people compared to the Scythians. There is also little evidence of fortifications from this period. 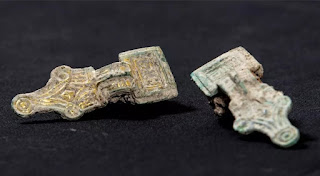 I think it's wrong to imagine the meeting of Saxons and Britons as entirely violent; we know there was intermarriage, and our sources show us Welsh warriors serving in Saxon war bands. The fact that some Roman administrative boundaries survived into Anglo-Saxon times is particularly intriguing.

But to imagin thate tens of thousand of Germans from the continent settled in Britain without violence, or imposed their language and culture without violence, is just silly. This was a warrior age, and war determined who held the land, and who held the power. The increasing cemetery evidence of early warriors in the Saxon population is only what I expected. 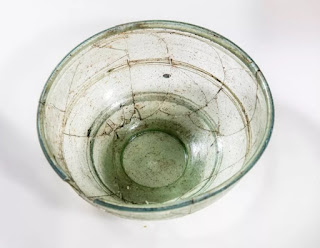 All of the artifacts pictured here came from Wendover. The excavators think that this green glass bowl was made before the Romans left Britain in 410 AD, so it was a very old heirloom before it was placed in an aristocratic woman's grave in the late 400s. 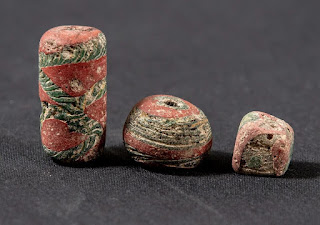 Three of the more than 2,000 glass beads found at the site, most likely imported from Gaul. 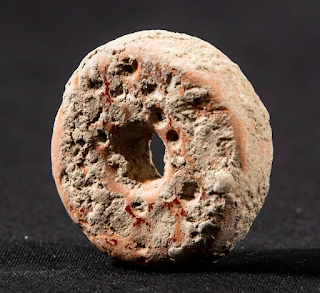 And a ceramic bead made from old Roman pottery.
Posted by John at 9:23 PM