Matthew Paris as an Artist 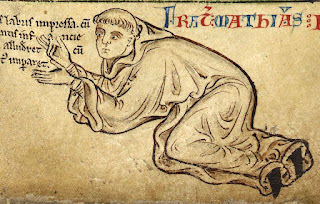 Trinity College, Dublin has just digitized a manuscript by chronicler Matthew Paris (c. 1200-1259), one of my favorite characters from the whole Middle Ages. Paris was a terrific writer – in fact he was too good of a writer, and kept adding things to his "chronicles" because they made the story better, for example, he is respondible for the notion that the participants in the Children's Crusade were sold into slavery by Venetians – and also a delightful artist. That's his famous self-portrait above, drawn in the margins of his chronicle. 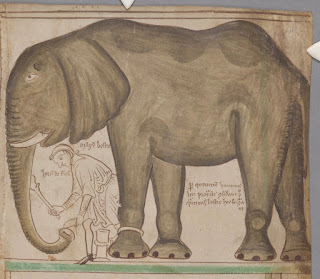 Another very famous work, the elephant that the King of France gave to the King of England in 1255. Paris made one of his rare trips outside St. Albans to see and draw it. 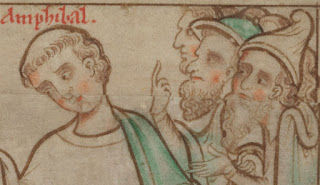 The manuscript just put online is The Book of St. Albans, a history of the monastery where Paris spent almost his entire life. This tells the story of a group of saints who worked to convert Roman Britain to Christianity in the 3rd century and mostly ended up martyred for their trouble. The first leader of this community was Saint Amphibalus, shown above with some of his converts. 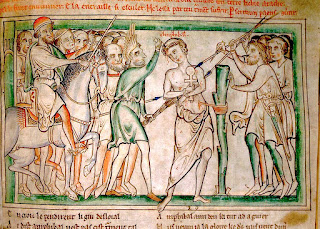 Amphibalus and most of his followers were massacred. (This is a picture from wikipedia, with the contrast heightened.) 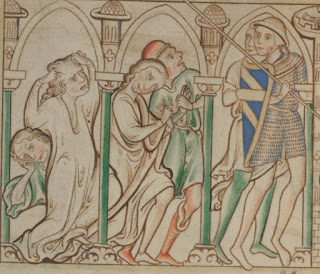 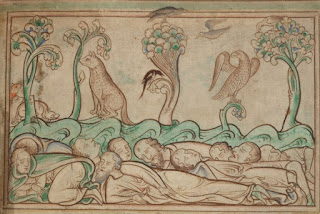 (but at least God sent a wolf and an eagle to watch over their bodies, and interesting inversion of the "beasts of battle" motif) 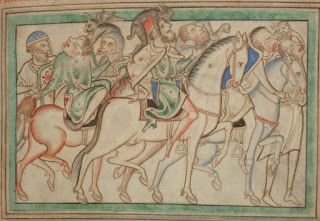 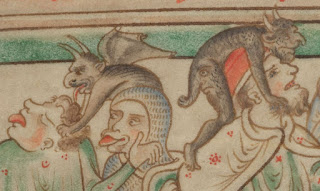 The killers of the saint were later attacked by devils. 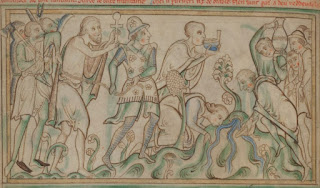 The community reformed around St. Alban. The new leader performed a bunch of miracles, like summoning up a spring that kept people from dying of thirst during a drought. This seems like a story that wandered in from the life of an earlier saint who lived in the Syrian or North African desert, since I am not sure anyone in Britain has ever died of thirst. 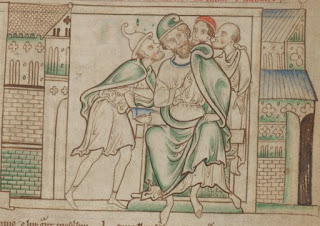 But a spy, referred to in the manuscript as a "Saracen," betrayed the Christians to the Roman governor. 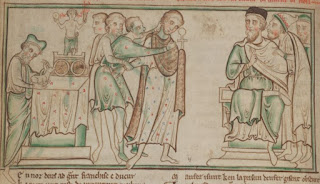 St. Alban was arrested and put to the test, but of course he refused to sacrifice to Apollo. 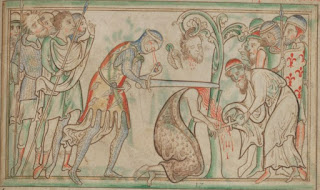 St. Alban and most of his followers were martyred. Also, the executioner's eyes fell out. 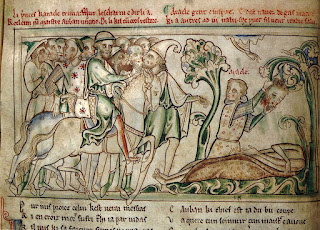 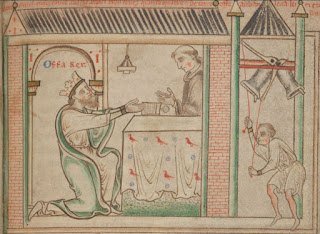 In the long run, though, it was all for the best, as Christianity took root in British soil fertilized with the blood of martyrs. Here Offa, famous King of Mercia, gives land to the monks to endow the monastery of St. Albans. 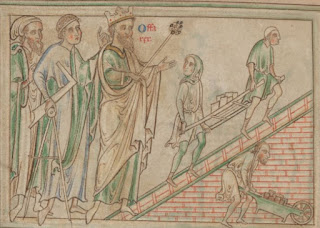 And orders construction of the buildings. 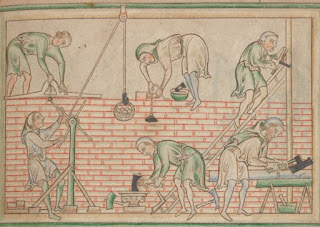 Looking at Matthew Paris' pictures makes me smile. He represents for me the gentle, creative side of medieval life, the sense of wonder, of delight in form, color, and story, that they built into their cathedrals and painted into their books. 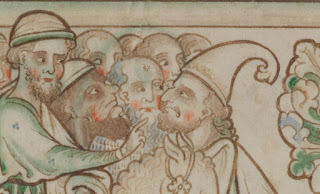 Paris was a terrific writer – in fact he was too good of a writer, and kept adding things to his "chronicles" because they made the story better, for example, he is respondible for the notion that the participants in the Children's Crusade were sold into slavery by Venetians

It's a bit darkly ironic, since the Venetians were the first nation ever to ban the slave trade, some two centuries before Paris was even born.

(Though to be fair, it was just the ~trade~ at first - ownership of slaves was still legal, and one could acquire slaves through private treaty. But still, the idea of the Republic itself selling people into slavery ought to have been laughable.)

This seems like a story that wandered in from the life of an earlier saint who lived in the Syrian or North African desert, since I am not sure anyone in Britain has ever died of thirst.

Well, likely not many people who were in good health anyway. But in the past (as is still happening in the present, in hospitals all across Britain) I'm quite sure many sick and elderly died of thirst when others failed to help them fetch water.

Of course, you need not go to Scilly to die of thirst in Britain - the Scottish Highlands are full of areas with little (accessible) water, or with small creeks that would, in fact, run dry during a period of drought like that in the miracle story.

And that's not even the driest part of the isles - perhaps unexpectedly for non-natives, the overall driest part of Britain is the southeast, typically seeing less than 20 inches of rainfall annually in some parts - meaning those areas a actually a "semi-arid" climate, on par with places like Spain and the Western Rockies. A literal desert gets 10 inches or less, so we're talking pretty dry compared to most places.