Hangin' with the Nayarit Indians 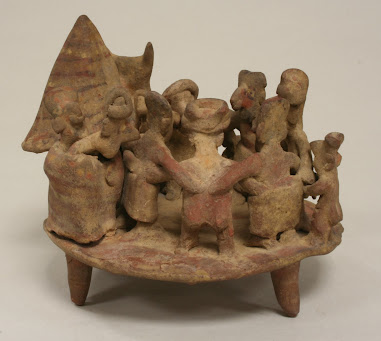 The Nayarit culture of western Mexico is usually dated to around 200 BC to 500 AD. Their art has the quality, rare in the ancient world, of making their lives seem pleasant and relaxed. Consider this dance scene. This may be some kind of religoius ritual, but the feeling one gets from it is that the people are mainly enjoying each other's company. 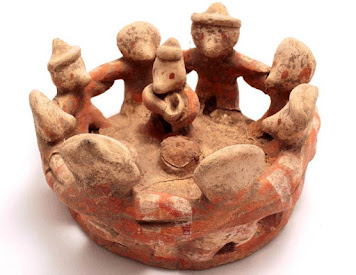 This famous, badly worn piece is known as the Circle of Friends, and is the model for the logos of several Mexican associations. 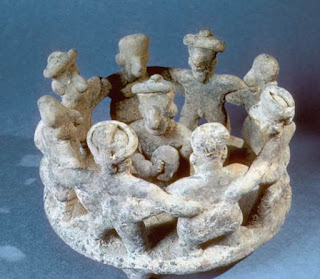 Here's a better preserved example of the same design. 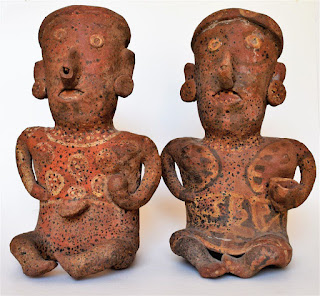 A couple of Nayarit gentlemen. There are few depictions of Nayarit men fighting, but plenty of them all dressed up and sitting around. 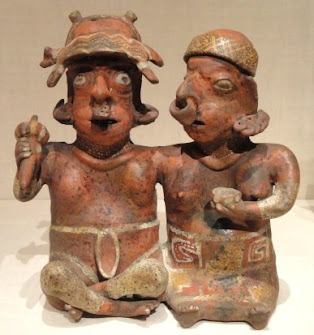 Even more common are depictions of couples. These all come from tombs, so these were the sort of people who imagined spending eternity together. 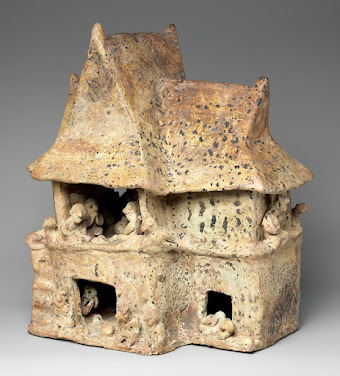 Archaeologists love Nayarit art because of the delightful depictions of houses. Dozens of these are known. 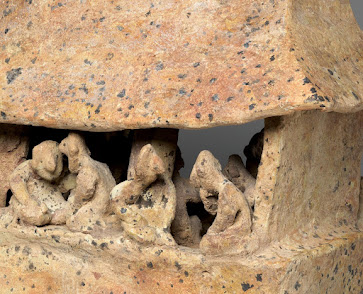 Some people in the houses seem to be working, but more look like they're just hanging out. 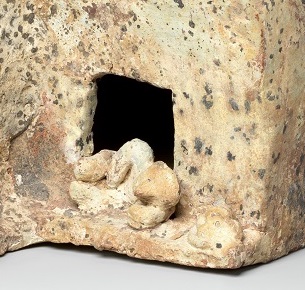 One interpretation of the multilevel houses is that the ground floor represents the underworld where the dead ancestors reside. And what did they imagine dead ancestors doing? 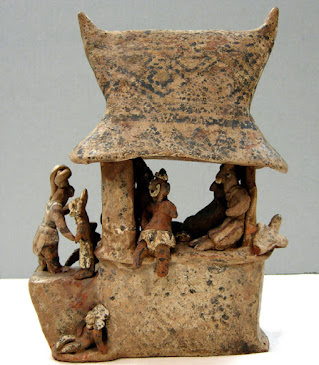 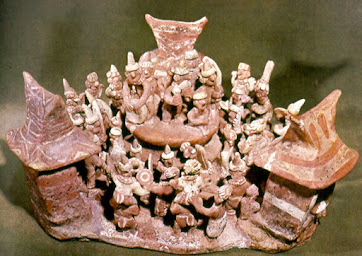 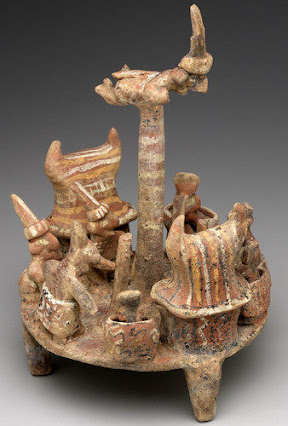 Village with someone who seems to be flying overhead. 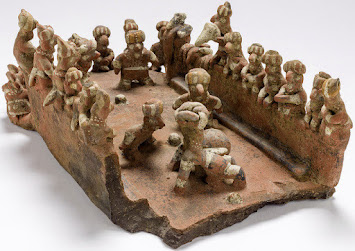 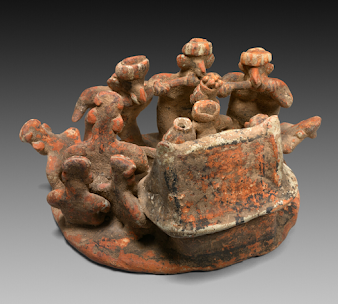 When European art historians steeped in the classical tradition first encountered these works, they thought the figuruines were dwarfs, trolls, or some other kind of grotesque. But, no, this was just the way Nayarit artists depicted themselves. 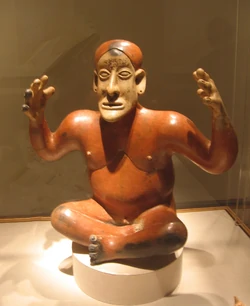 Just looking at these puts me in a better mood. This is my favorite, the character known as the Storyteller. Imagine him with one of those circles of friends and neighbors, leaning in close to hear him recount his tale of ancient gods and heroes; one of the funny ones, most likely, so everyone could laugh about it together.
Posted by John at 3:18 PM

Very cool and interesting post. It is striking how different these themes are from what we usually think of as Mesoamerican art. I wonder if the two traditions were aware of each other and felt any sort of tension. Do we have anything similar from other cultures, esp. the ones we associate with the more familiar pyramids-and-skull-racks type of art? Was there a fierce upper-class tradition and a homey, relaxed commoner tradition? Or were the Nayarit just a sort of isolate? Or am I just being a tendentious outsider locked into a tired, dialectic-seeking academicism?

@David- As you know, it's always to know how artistic traditions relate to the rest of the culture. And the difference is not absolute; there are some Aztec versions of the Circle of Friends figurine, for example.

But I have the impression that for the Aztec and the Classicial Maya the elite that waged wars and staged horrible sacrifices was rather distant from ordinary people. You probably know that most Maya people lived in houses and villages that looked pretty much the same from 2000 BC to 1950 AD, indifferent, so far as we can tell, to the rise and fall of the great cities. I believe the same is true of the Mississippian Indians in North America; I think there is evidence that some Indians always hated the mound cities and their kings.

So maybe the Nayarit elite just had a different style from the Aztecs. I believe, though, that there was a real difference, that the high civilizations of the Toltec and Aztec were something of an anomaly, and the lives of many Mexicans were more like the way the Nayarit depicted them.