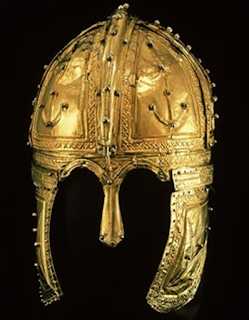 In 1962, German archaeologists were working in a massive graveyard near Krefeld, a Roman and Merovingian settlement on the lower Rhine. In grave no. 1782 – and yes, this was the 1,782nd grave excavated in the cemetery, where the total eventually passed 6,000 – they found something spectacular. 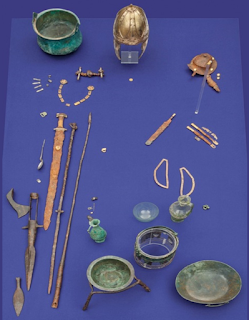 This is now known as the Princely Grave of Krefeld. Nothing organic was preserved, so the date is derived from the artifacts. Some sources just say "early 6th century," while others say c. 525 AD. Krefeld was then part of the Merovingian kingdom. 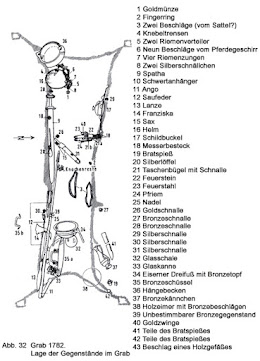 There was nothing besides the artifacts to mark this out as an important grave; as you can see from the plan, the artifacts were jammed into a space barely big enough for a standard modern coffin. 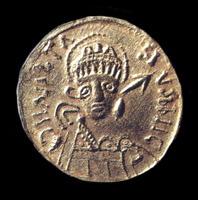 This interesting coin was found in the head area, and the excavators think it was placed in the mouth of the deceased. It is a rather crude Frankish copy of a gold solidus of Emperor Athanasius I (r. 9491-518).

Ring. The Museum Burg Linn in Krefeld is not much for posting large images.

Weapons. The large spearhead to the bottom left of the sword is probably from a mounted lance. 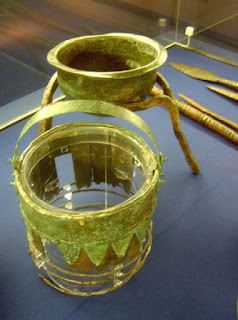 You know you're around people who drank like barbarians when you encounter the gold bucket. On the other hand, look at this beautiful etched glass bowl. I find these graves to be a wonderful look at the Germanic elite of that period. They may have been Christian, but they maintained pagan burial practices that bound them to a Eurasian barbarian elite. They were not Roman, but they had adopted some Roman ways and loved fancy glassware from the south. They were their own sort of people, and their refusal to assimilate to Roman ways doomed the elite culture of antiquity, ushering a new sort of Europe.
Posted by John at 6:31 PM