The Battle of Gelduba, AD 69 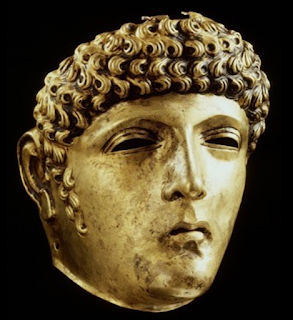 On December 1, AD 69 – or so the tradition comes down to us – a battle was fought at the place now known as Krefeld, Germany, between the Batavians and two Roman legions. About 20,000 men fought in this battle, roughly half on each side. 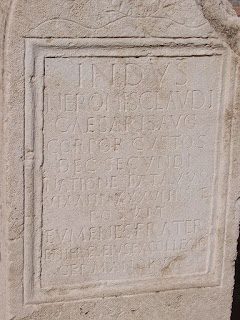 But this was no simple conflict between Romans and Barbarians. It was one small part of the complex civil war we call The Year of the Four Emperors. The Batavians, who lived around the mouth of the Rhine and had their capital on an island there, had been Roman allies since 43 AD and had sent thousands of men to assist in the conquest of Britain. Their leader in 69 is known to history as Gaius Julius Civilis, a moniker he probably assumed to emphasize his loyalty to the Julio-Claudian dynasty and his status as a Roman citizen. He was both the hereditary king of the Batavi and the hereditary commander of their troops in Roman service. He somehow fell foul of Nero's regime (like a lot of other people), his brother was executed, and he was sent to Rome in chains to be judged by the emperor. 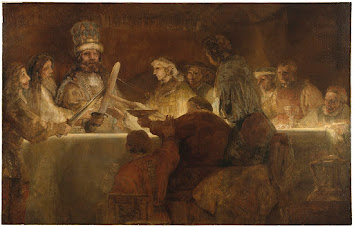 Rembrandt, Conspiracy of the Batavians under Claudius Civilis

Understandably, when revolt against Nero broke out under the leadership of Galba, Civilis and the Batavians supported the revolt. After more intrigues, the Batavi ended up supporting the Roman general Vitellius, and the Batavian cohorts helped him win the Battle of Bedriacum and become emperor himself in April 69. But the Batavi felt ill-used by Vitellius; in one of his imaginary speeches, Tacitus has their commander say "That in truth they were no longer held as confederates, but treated like slaves." So when the commander of Roman forces in Syria, Vespasian, launched a revolt of his own, Civilis convinced the Batavi to switch allegiances and support his cause. (Tacitus: "As with mighty concurrence he was heard, he bound them all in a combination, solemnized with barbarous usages, with maledictions and imprecations peculiar to the country.") 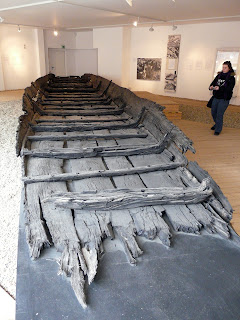 But the legions along the Rhine remained loyal to Vitellius, so it was as part of a Roman civil war that imperial legions and barbarian horseman happened to fight that December.  The Batavians were actually organized as Roman troops, eight cohorts of allied cavalry and several cohorts of infantry as well. 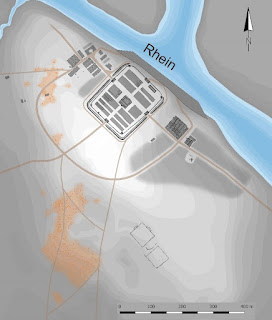 The fight took place outside a Roman fort called Gelduba, within which two Roman legions had been besieged after an earlier battle. When a force came to relieve them they marched out to do battle. According to Tacitus, the Batavian cavalry broke through one Roman legion ("with the hideous chanting of the men, and the howlings of the women") and seemed to be winning the battle, when timely Roman reinforcements arrived in their rear, leading to their defeat, with great slaughter. 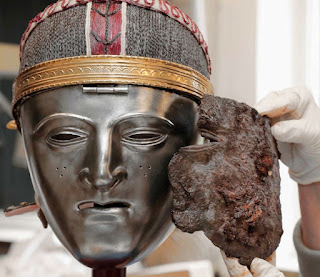 One never knows how far to trust such ancient accounts. But we know they did fight because of spectacular archaeological discoveries made around Krefeld since 2017. A news account made the rounds this week that said the finds include "coins, weapons, more than 300 horse skeletons, jewelry, helmets, and a soldier’s belt buckle." The news story was about this mask fragment, shown next to a reconstruction of a complete mask. Quite a few of the known Roman cavalry masks come from the lower Rhine (like the one at the top of the post), so it may be that they were a Batavian specialty. 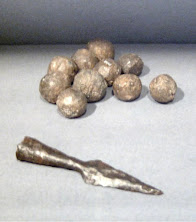 I spent a couple of hours practicing my German and trying to learn more, but had little luck. The museum where these finds have ended up, the Museum Burg Linn in Krefeld, posts only postage-stamp sized images. Like this one, which depicts a bolt head and sling balls from the battlefield. No sign of a plan of the excavations, or any write-up beyond the paragraph that appeared in the news stories. 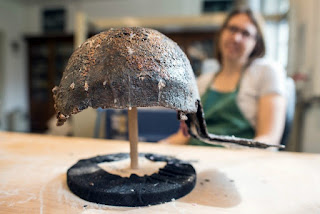 And a helmet, also from the battlefield. 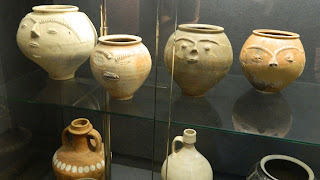 So I can't offer you the illustrations I hoped to find. On the other hand, the museum in Krefeld has a lot of other Roman stuff, most of it from a graveyard where 6,000 Roman- and Merovingian-period graves were excavated over the course of nearly 40 years. Like these pots, which the museum caption simply identifies as "Roman." I doubt Cicero would have agreed. How about "Romano-Batavian"? 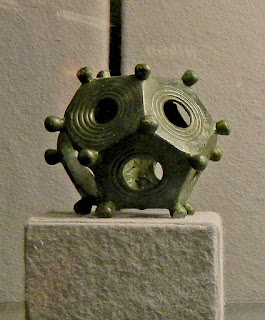 A Roman dodecahedron. I never realized until I saw a photo of this one in its case how big some of these are; this one is the size of a large grapefruit. 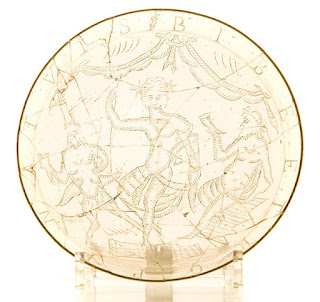 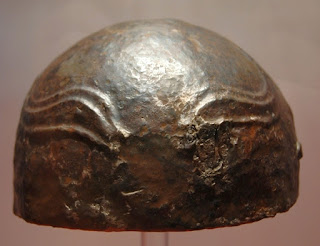 It's worth pausing to note that archaeology has confirmed another bit of Roman history that was once known only from a single text. So far as I am aware, none of the major events reported by Livy and Tacitus has ever been shown to be a fabrication. Obviously the details might have gotten muddled, I mean, historians argue over the details of battles fought in Viet Nam, for which they have rooms full of documents. But that there was a battle involving Romans, Battavians and horses, fought just outside the walls of a legionary fort, has been spectacularly confirmed.
Posted by John at 8:09 PM

Love those archeology posts. Leaving a comment just to let you know :)