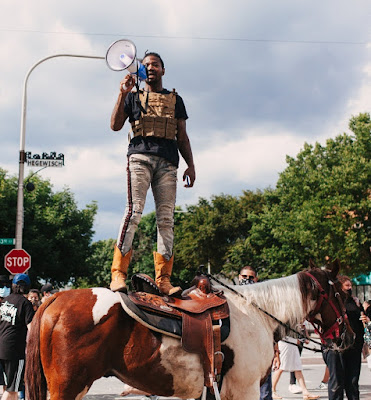 Delightful story in the Times about Adam Hollingsworth, a black Chicagoan who makes waves riding around the city's South Side preaching brotherhood. He has been a fixture at many recent protests, as in the photo above.
He recently got nationwide attention because of one of the social media dust-ups that are so much a part of our narrative these days:

In late May, as protests against police brutality began to seize American cities, videos of a Black man on horseback wearing a bulletproof vest spread widely on social media. In many of the posts, users suggested that he had stolen a policeman’s horse.

But Adam Hollingsworth is no thief.  . . . You have to have “some kind of experience to get on a horse to ride it,” he said in a phone interview last week. And, he added, “if you steal a police horse, it’s like kidnapping a police officer. You can’t just get up and steal a police horse.”
As the false accusations piled up, Mr. Hollingsworth said his car was vandalized and that he received death threats. The experience hammered home for him that his reason for riding — to expand people’s ideas about Black masculinity and to promote a message of unity in some of Chicago’s most racially segregated neighborhoods — remains urgent.

Hollingsworth has a bullet in his chest as a memento of a rough youth, but these days he preaches peace. Here is more on him, from a Chicago Tribune story that also has more on his past than the Times piece:

Hollingsworth’s reputation grew when he visited the Little Village neighborhood June 2, after unconfirmed social media posts indicated that alleged Latino gang members were threatening Black people due to fears of looting. Rumors swirled, and Hollingsworth said he was very scared to visit.

His Facebook video shows him riding through Little Village, a little tentative at first — “I come in peace, y’all” — and then more relaxed as, block after block, people wave, whoop, call out “Black Lives Matter” and film Hollingsworth on their cellphones.

“Thank you, queen,” Hollingsworth says when a woman in a tank top offers his horse a bucket of water.

“Ain’t nothing but love in Little Village,” a man with a red baseball cap tells Hollingsworth. “We Mexicans love everyone. We ain’t with all that (stupidity).”

In the video, Hollingsworth points out Black people walking freely on peaceful Little Village streets, and sympathizes with residents’ concerns about looting by protesters: “The Black and brown is together, man. They just don’t want nobody (destroying) their (stuff), and that’s how Blacks should be,” he says. “That’s how every race should be.”

If you ask me, what America needs is less spreading of internet rumors and other (stupidity) and more people who ride horses through cities talking peace and brotherhood.
Posted by John at 10:10 AM

"If you ask me, what America needs is less spreading of internet rumors and other (stupidity) and more people who ride horses through cities talking peace and brotherhood."

Sure, but one of those option makes money for the corporate media, and the other doesn't. Guess which one will continue to dominate our society?

We need to impose a system of fiduciary responsibility onto private enterprise. Companies must be required to serve the public good, rather than be allowed to exploit society at large to absurdly enrich only a small handful of owners, executives, and shareholders. Until we do so, they will continue to operate destructive enterprises such as the aforementioned internet rumor mill.