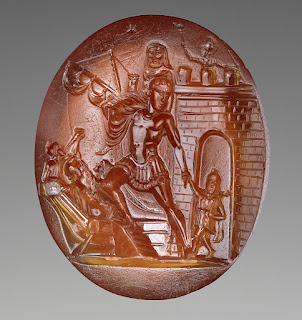 Feds bust major art forgery ring in northern Michigan. Dealer comments: “These were very beautiful – fake or not. Whoever did this is quite an accomplished artist — just not the artist he or she purported to be.”

Long New Yorker piece by Gideon Lewis-Kraus on the brouhaha between Scott Alexander and the New York Times, with a discourse on the relationship between the tech world and the rest of liberal America.

The Arsenic Cake of Madame Lafarge.

Damon Young, author of a book about racism, is getting tired of Serious Conversations about Race.

In a NY Times Op-Ed, the Mayor of Minneapolis gives a pretty intelligent exposition of the white guilt version of contemporary events: "Police officers understand the dynamic well. We give them lethal tools and a lot of leeway to keep our parts of town safe."

How one domineering librarian kept Goodnight Moon out of the New York Public Library for 25 years. She had "a custom-made rubber stamp reading NOT RECOMMENDED FOR PURCHASE BY EXPERT, and she was not afraid to use it."

If you hate the police as they are now, how about becoming an officer yourself? (NY Times)

Contemplating plastered skulls from the ancient Near East

Murder at the North Pole

Conor Friedersdorf chronicles some of the recent attempts to cancel liberals for insufficient radicalism on the subject of police violence.

A nightmare vision for racists: major new study says populations of many European and east Asian nations will be cut in half by 2100 while populations in Africa treble. But since population projects from thirty years ago were way, way off, I refuse to get very invested in the contemporary version.

Fascinating BBC story on Freiburg, the south German city where the Green Party was born, now regularly cited as the most sustainable city in the world and also one of the few German cities where births outnumber deaths. But note that the city's pro-bike, anti-car ethos is possible partly because of design decisions made after WW II. Recreating cities requires a long, long, long-term effort.
Posted by John at 7:27 AM

"How one domineering librarian kept Goodnight Moon out of the New York Public Library for 25 years. She had "a custom-made rubber stamp reading NOT RECOMMENDED FOR PURCHASE BY EXPERT, and she was not afraid to use it.""

The article tells us that Moore preferred The Velveteen Rabbit, a really rather sad book full of terrible and depressing events, with a bittersweet-at-best ending reliant on a faerie as deus ex machina and the magical transformative power of love and feelings... but somehow disliked Goodnight Moon for being "unbearably sentimental".

I also have to wonder if at the time she was banning an inoffensive children's book in 1947, whether a visitor to the library might instead be able to check out a copy of Mein Kampf, or other works that are similarly revolting and potentially dangerous in the wrong hands/minds.

If you hate the police as they are now, how about becoming an officer yourself? (NY Times)

What this bizarre opinion piece seems to be suggesting is that liberals should join a conservative institution they fundamentally and morally disagree with en masse, spend decades climbing the ranks to reach the top positions of power, and only THEN use their influence to enact change which is needed NOW.

The solution to corporate greed isn't for anti-corporate individuals to slowly infiltrate the corporate ranks, become CEOs by promoting corporate interests, and then all of a sudden reverse course. The solution to out of control militancy isn't to have pacifists join the army, rise to the rank of general by skillfully fighting wars for decades, and then turn around and use their positions and influence to suddenly demilitarized and pacify the armed forces. So why would someone think the solution to police brutality would be the exception?

That Damon Young link you have takes one to an article about judicial textualism. I mention this because, if you actually wanted to link to his recent column in the NYT, I think it's worth correcting. That NYT column was one of the funniest things I've read in a long, long time. Whatever one's position on these things, it's a simply brilliant piece of writing.

Also, the Conor Friedersdorf link doesn't work. I get a "404 Error."