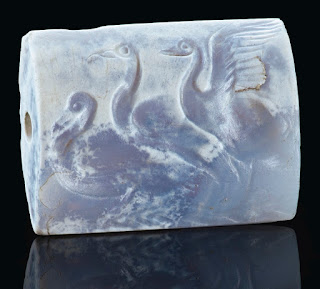 Minoan blue chalcedony tabloid seal with three swans, Late Palace period, circa 16th century BC
How the US Navy captured a German U-Boat in 1944, great story for WW II buffs.
The hare considered as a magical beast.
Conor Fridersdorf interviews Toby Muse to get an update on the Cocaine War in Colombia.
What happened when the NY Times ran one of their "forgotten no more" obituaries about the woman most famous for shooting Andy Warhol.
And more NY Times news: Daily Beast story about the fight within the Times over whether to print the real name of blogger Scott Alexander, which led Alexander to take down his blog.
Lovely NY Times photo/text essay on the saffron harvest in Italy.
Review of two books by theologian David Bentley Hart, who thinks that 1) there is nothing in the words of Jesus or Paul to justify belief in eternal damnation, and 2) there is a whole lot in the words of Jesus that requires us to be communists.
Women, pain, accusations of hysteria, and the whole nexis of sexism and medicine.
Ross Douthat ponders the canceling of Woodrow Wilson, a man he (and I) always despised.
How about combining life and health insurance into one plan? After all, who has a greater interest in your health than your life insurance company?
Reintroducing elk to Kentucky, using reclaimed strip mines. (NY Times)
George Orwell and Black Lives Matter. After all, one thing Orwell knew a lot about was racist policing.
TLS Review of three books on the issues surrounding "cheap food," from Victorian times to today.
David Brooks: "We Americans enter the July 4 weekend of 2020 humiliated as almost never before."
The perils of ideology: brilliant British geneticist J.B.S. Haldane, who put natural selection on a sound genetic footing, was such an ardent communist that he even defended Trofim Lysenko's purge of Soviet biology.
Posted by John at 9:33 AM

While I agree about Wilson -- good riddance -- I disagree with this.

"But our monuments and honorifics exist primarily to honor deeds, not to issue canonizations — to express gratitude for some specific act, to acknowledge some specific debt, to trace a line back to some worthwhile inheritance."

His examples are Jefferson and Lincoln. You could place Greek Gods in the Lincoln and Jefferson memorials, and they would be at home. If the monument is large enough, you can't separate deeds from canonization.