A Ring and a Curse from Roman Britain 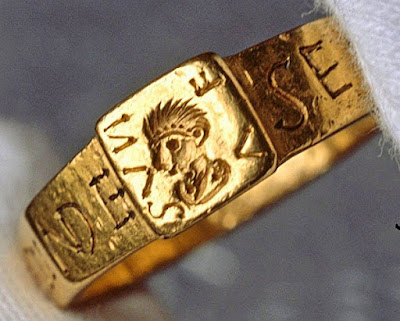 In 1785, this gold ring was found in a field near Silchester, England. The top depicts the goddess Venus, her name spelled backwards showing that this was used as a signet. The ring likely dates to the 4th century AD.
But around the outside someone later carved a name, Senicianus, and a garbled text that seems to be "vivas in deo," lives in God, which was a Christian saying. 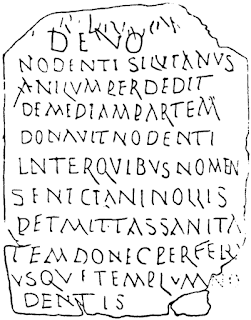 In 1929 famous archaeologist Mortimer Wheeler learned of this ring and thought the name sounded familiar. After a search he discovered where he had seen it before: on a lead curse tablet found at a temple of the pagan god Nodens, 80 miles away from Silchester near Lydney in Gloucestershire. On this tablet a certain Silvianus complains that his gold ring had been stolen by a man named Senicianus. He deposited money at the temple equal to half the ring's value, hoping the gods would "permit no good health to Seniciacus."
If this is a coincidence, it's a quite striking one.
To make matters even more interesting, Wheeler took the ring, with its circular inscription, to a philologist named J.R.R. Tolkien for help with the translations. Who thereby got his hands on an actual cursed ring from ancient times.
The person who recently put this on Twitter, Gareth Harney, wonders if this piqued Tolkien's interest in magic rings, but I think the old German Siegfried legend, as filtered through Wagner, is the real source. Still, it's fun to imagine what Tolkien made of this little stolen treasure.
Posted by John at 10:55 AM

"He deposited money at the temple equal to half the ring's value, hoping the gods would "permit no good health to Senicianus."

If this is a coincidence, it's a quite striking one."

...what if "Seniciacus" isn't a name per se, but is a placeholder name such as John Doe?

I read about something similar on a history blog of some sort that I can't recall now, where there were a pair of old fashioned names that kept cropping up in records of lawsuits all across England or America (I can't quite recall), during the 1800's (?) that made it seem like the one fellow was relentlessly following and committing crimes against the other, who kept fleeing to further and further locations, backtracking to places they had been years prior, etc. Once you knew that the names listed were placeholders that have since fallen out of usage and been forgotten, it becomes apparent the cases are all unrelated.

Wikipedia offers a translation of the tablet that reads, "Among those named Senicianus permit no good health", which is clearly referring to a group of people, not merely one. Given that Silvianus clearly is drawn from "Silva" and refers to someone from or of the forest, might Senecianus be derived from "Senecio" (groundsel) or "Senex" (old) and be somehow descriptive of a KIND of person, or perhaps even a member of some organization? In effect calling the thief something like "a noxious weed of a man", or perhaps "a worthless old man", or maybe a follower of some unnamed old man, or similar?