Today's Place to Daydream about: Dubrovnik 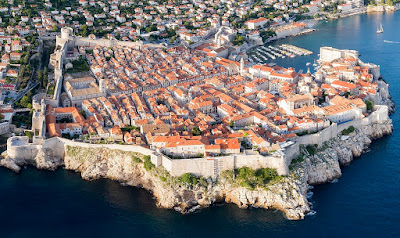 Today my thoughts wander back to the Mediterranean, to the tourist mecca of Dubrovnik in Croatia. 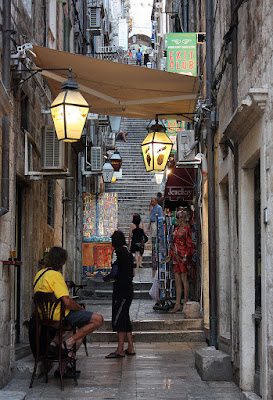 All the tour guides warn of terrible crowds in the summer and recommend visiting in spring or fall. But judging from the photographs I have seen online many of the cultured types who spend their vacations gazing at medieval building details visit at Christmastime. It's too hot out for me to think about beaches or summer sun, so let's imagine we're there in October, on a pleasant day when shading clouds alternate with sun that will brighten up our own photographs. 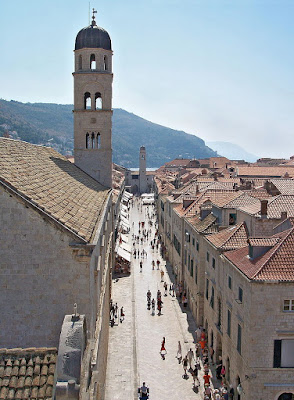 The town is a small place today, with 40,000 people, because it hugs an inaccessible site on a rocky coast with no good routes inland. It was founded by refugees who fled less secure places during the chaos of the collapsing Roman Empire, according to one chronicle in AD 620. 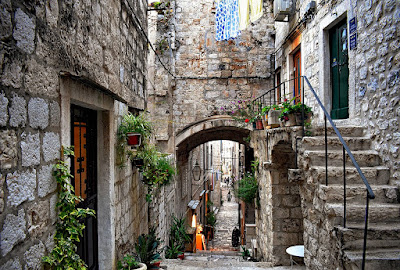 The medieval feel of the town led to its being used for King's Landing in the Game of Thrones TV series, and if you are so inclined you can walk the exact route of Cersei's walk of shame. The old city is car-free, so there's no chance you'll get run over. 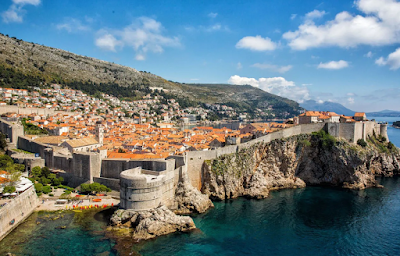 The old city is surrounded by walls, which are also among the oldest authentic monuments in the place. The town was first fortified the 9th century but the core of the stone you see was laid in the 1200s and added to in the 1400s. 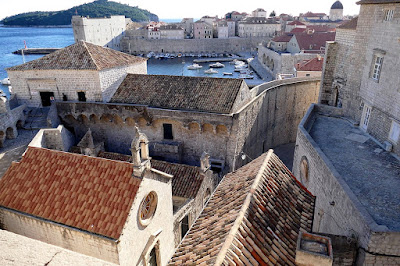 The town belonged to the Byzantines, then various Slavic overlords, and then in the 13th century it became essentially independent as the Republic of Ragusa. It was then Italian-speaking and had close ties to Venice, which was sometimes its suzerain. Ragusa was always a mixed place, though, which many Slavs, Jews, Turks, and others. Many Jews came to Ragusa from Spain after the forced conversion of 1492. By that time Ragusa was dominated by the Turks, but they pretty much left the place alone so long as their tribute was paid on time. Ragusa's reputation for tolerance led to a burst of American scholarship about its past in the 1980s and 1990s. 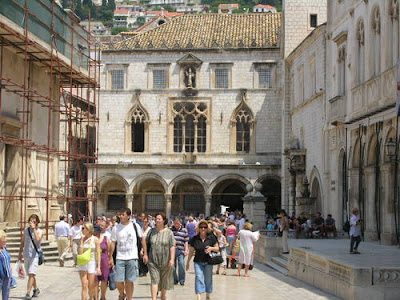 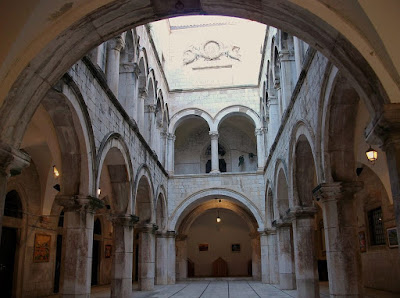 The city was devastated by an earthquake in 1667, with the loss of 5,000 lives and most of its churches and other public buildings. One that survived was the Palazzo Sponza, built as a private house in the early 1500s but pressed into service as a town hall after the disaster. Now it houses the rich public archives, another reason so many American historians went there. 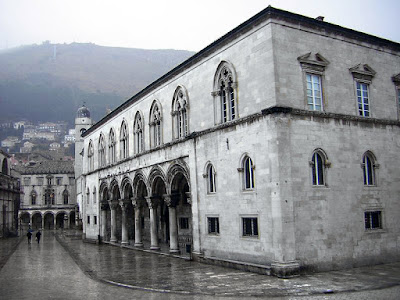 Also the nearby Rector's Palace, for which various sources give construction dates like "1420 to 1808." 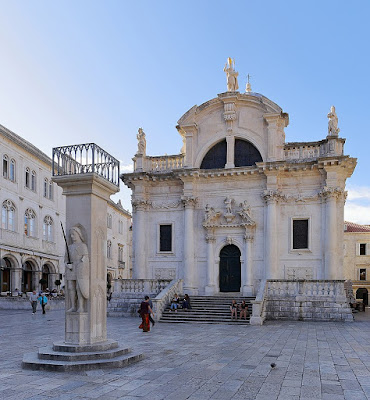 The most famous church is St. Blaise's, dedicated to the town's patron, but as you can see completely rebuilt after 1667. 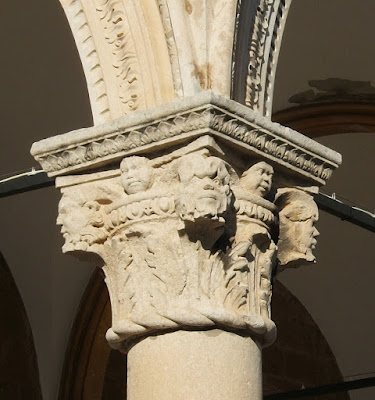 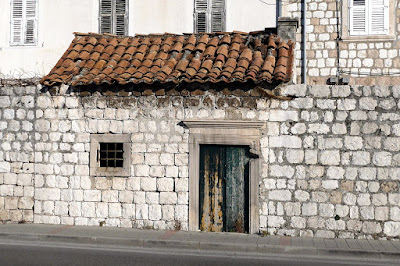 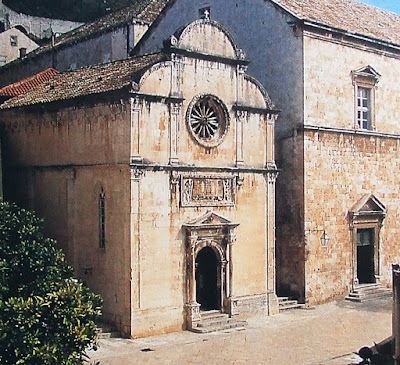 So Dubrovnik is short on famous buildings, but it has its own glories. What drew me to the place today was the thousands of photographs posted all over the internet of details like these, little bits of history or whimsy that bring the place to life in my mind. 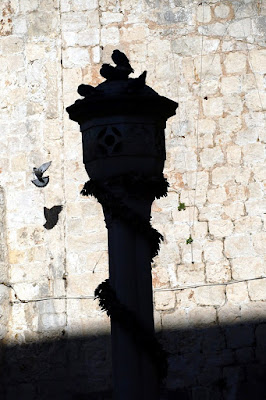 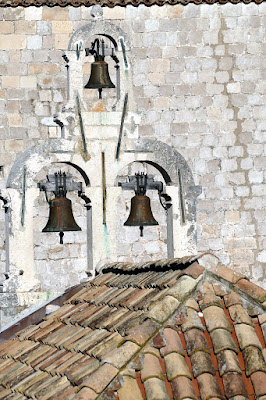 Someone named Donald Judge posted a huge set to wikimedia, from which these are drawn. 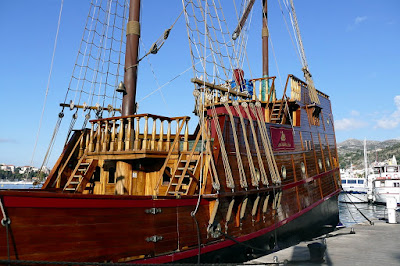 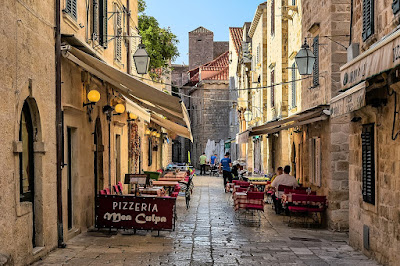 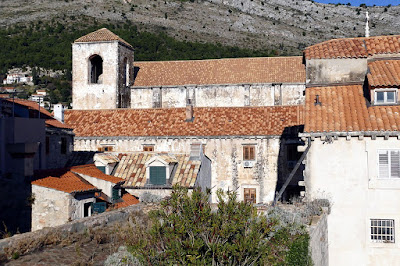 It seems like in the right season this would be a wonderful place to explore. 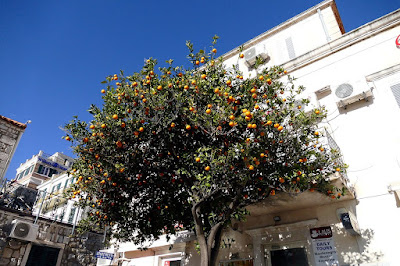