The Genetics and Folklore of the Hungarian Royal Family

From their first appearance in written records, in the late 800s AD, until 1301, the Hungarians were led by the Arpad Dynasty. The man who led them into modern Hungary was known as Ügyek; Arpad was his son. According to the chronicle known as The Deeds of the Huns and Hungarians, Ügyek was descended from Attila the Hun. The Huns and Hungarians were not closely related people and Hungarian, a Finno-Ugric language, has no relationship to Hunnish. So many moderns have refused to believe this.

Now some scientists have learned something interesting via ancient DNA:

Based on the genetic analysis of two members of the Árpád Dynasty, it appears that they derived from a lineage (R-Z2125) that is currently predominantly present among ethnic groups (Pashtun, Tadjik, Turkmen, Uzbek, and Bashkir) speaking Iranian or Turkic languages.

One of the Arpads they sampled was King Béla III (1172–1196); the other was one of additional individuals (six males, two females) who were also placed in the Royal Basilica of Székesfehérvár.

So the male founder of the Arpad line really did come from central Asia into Europe, which means that for all we know the dynasty really was descended from Attila. 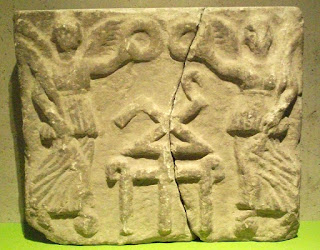 This reminds me of a weird fact I learned years ago about the nobility of Poland. In the 16th and 17th centuries they insisted that they were not, in fact, Slavs, but descended from the Sarmatians who dominated the whole steppe region between about 200 BC and 400 AD.  For a while some of them dressed in what they thought were Sarmatian clothes (really they were Turkish). Western rationalists like Voltaire mocked this pretension and it went out of fashion in the 1700s.

But rather than coats of arms the Polish nobility liked to identify their families using abstract signs called Tamga. There's one in the plaque above, surrounded by winged Victories. Modern archaeology shows that these were once widely used across the steppes and into central Asia, especially by the Sarmatians. Not, so far as we know, by the Slavs. Archaeology also shows that people who were probably Alans, a Sarmatian offshoot, did settle in southern Poland in the post-Roman age of migrations.

Sometimes weird old legends have some truth to them.
Posted by John at 8:02 PM

The thing is, genetics don't tell you anything about cultural shifts. The Hungarians might potentially be descended from Atilla, but if so that means at some point they underwent a truly radical cultural transformation and adopted a wholly foreign language, mythology, et cetera, and did so in only four and a half centuries. Not impossible, but unusual to be sure.

Of course, I'm being sloppy with my assumptions - conflating the Arpad dynasty with all Hungarians. Perhaps a simpler and more likely explanation is that the Arpads descended from Atilla (or the Huns), but took on the Finno-Ugric culture of a people they came to rule over through some adventure/conquest.

I think most archaeologists would assume your second idea; that a foreign dynasty took over a mostly Finno-Ugric people. It might even have been one marriage; some Hungarian king had only daughters, one of whom married a Hunnish prince. He would have brought a few friends and relations with him.