Each day brings more images of dark-green-clad, helmeted figures striking and spraying unarmed protesters on the streets of Portland, Ore. The figures are federal officers, rejected by local leaders and embraced by President Trump, who speaks of spreading that federal presence to other troubled cities

It is not clear, says Comey, that this is illegal, but


What is clear is that they are acting stupidly, a mistake they may be about to repeat in other places, with lasting consequences for federal law enforcement.

With some protesters itching for street confrontations with officers in full tactical gear, federal officials are giving a small group of violent people what they want. And they are giving the citizens of Portland — and the rest of us, no matter our politics — what we don’t want: the specter of unconstrained and anonymous force from a central government authority. It has been the stuff of American nightmares since 1776.

Fairly or unfairly, visions of Department of Homeland Security officers in camo without apparent identifying insignia dragging people into unmarked vans are now seared into the collective memory. Federal law enforcement, like all parts of the justice system, depends upon the faith and confidence of the American people, a credibility now being spent, recklessly, by the Trump administration. And the Department of Homeland Security, a key element of this administration’s chaotic and often immoral immigration enforcement, had precious little credibility left to spend in the first place. Thanks to Portland, its cupboard is now empty.

And even if it weren’t behavior inconsistent with American values and self-defeating for the agencies involved, it is also just plain dumb to give protesters another sinister embodiment of the feds to rail against. . . .

So it’s dumb and self-defeating on many levels for the feds to engage the way they have in Portland. No sensible law enforcement leader would approach it this way. Which begs a question: Is televised conflict the goal?

You have to think, yes, that is the goal. 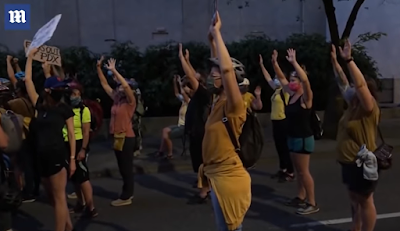 And what do I think people should do about this provocation? Well, exactly what one group of protesters is doing, the Portland Moms who have confronted federal agents by singing lullabies.

Now the images many people will remember from this fiasco will be lots of pleasant-looking women singing to scary-looking government thugs.

What will not defeat American authoritarianism is not antifa bros "fighting back," but regular people refusing to meet violence with violence.