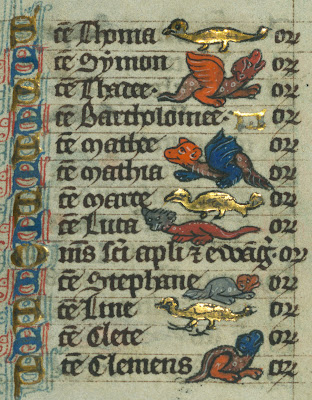 Little dragons in a Book of Hours from Flanders, c. 1350-1390
Since I have been linking regularly to articles on liberal cancel culture, it's only fair that I link to Max Boot's essay on conservative cancel culture, which might be summarized as "love Trump or get lost." Indeed many conservatives, perhaps most outrageously Lt. Col. Alexander Vindman, have been driven out of government or journalism for daring to criticize Trump.
The iPhone Photography Awards
The Netflix show "Indian Matchmaking" is a huge hit with people of Indian origin around the world, but it has also raised a storm of protest. Because, so far as I can tell, it depicts the arrangement of marriages as it is actually done and does not criticize the more problematic aspects of the process.
According to the Times, New York's tailors are now spending all their time letting out the clothes of people who gained weight during the lockdown. I think I gained 5 pounds during the first two months so I've had to put myself on a rigorous diet to keep this from spiraling out of control.
Borowitz Report: Fauci Urges Trump to Remain on Golf Course Until Pandemic Is Over.
NY Times story on the head trauma caused by bobsledding and skeleton, which may be causing a rash of suicides. Yet more evidence that while exercise is good for you, pursuing almost any sport at a very high level is usually not.
Reason wonders why the new US Space Force has horses.
In Japan, building a dam with robots
Hand-cranked miniature moving figures by Federico Tobon, quite charming.
Something different to collect: vintage gas station signs.
The disappearing vegetables of South India: reviewing a cookbook from 1951, a local chef finds 20 different varieties no longer available. He blames the Green Revolution and monoculture.
Could you outrun a Tyrannosaurus Rex?
More trials using Anglo-Saxon remedies to treat antibiotic-resistant infections.
Microsoft's plan to not only reduce its current carbon emissions to zero, by the most comprehensive measure, but to offset all the carbon emissions it has ever been responsible for.
The origin of the large Sarsen Stones that make up most of Stonehenge has been narrowed down to an area called the West Woods about 10 miles (15 km) from the site. This precision is possible because scientists got hold of a core drilled out of one of the stones in the 1950s and therefore not weathered; weathering changes the chemical composition of rocks too much to make exact sourcing possible using a chip from the outside of a stone.
Posted by John at 6:53 AM

What is controversial about arranged marriages as they are actually done? I know several people who have got married that way, and they seem to have a better track record for marital happiness than the rest of the married people I know, on average. I am not familiar with the practice as it exists in India. Is there something particularly horrible about it?

Should have read the article first, obviously. But I don't see any reason why any of the show's critics should have anything whatever to say about the show, since they don't give a crap about marriage anyway. People who are willing to have an arranged marriage are self-evidently people who think marriage is very important. These are two totally different and non-overlapping groups of people. Why should any of them care what the others think?

"could toss human-sized chunks of meat 16 feet into the air with its jaws."

Show me the video!

Couldn't run??? These kinds of predictions usually don't stand the test of time.

The heaviest elephants weigh a couple tons less than a T Rex, and they can run, but not very quickly or for very long, and they have the HUGE advantage of four legs. T Rex is stuck trying to balance on two, with the added issue of being top/front heavy, mitigated only slightly by their large tails.

As for the accuracy of the models, they're actually quite good. It's simple physics and materials science. We know how much stress a given material can take before failing, and we can determine the forces that will act on a particular design, and even making generous allowances for tolerances, you quickly reach a point where it becomes physically impossible for the design to NOT fail under certain conditions.

You can engineer a body and skeleton and musculature the same way you engineer a construction crane or piece of machinery. We can build marvels of engineering using materials like modern steels, but those same designs could not be made to function when constructed from wood and rope, or bone and sinew. They would break.

Thanks, G, but I've staked my claim.

A Rino can outrun (over 30 mph) a man for short distances. A hippo can get up to 20 mph. And they and elephants are not predators. Models are difficult things to get right and are only ever as good as the data and assumptions they are based on. How much do we really know about how muscles, tendons, ligaments, and even bones worked together in these extinct creatures where all we have are fossils? Little changes in design can result in great differences, and "can't run" is a low bar to beat -- an overly bold statement leaving no wiggle room given the little evidence we have about the physiology of these creatures. And it is not like there is agreement among those who study this type of thing. I wonder if they said "can't run" because of the attention it garners. Not much risk saying such a thing given the species last roamed the land 60 million years ago. Mind now, I'm not saying a T-Rex can run a marathon or even a 40 yard dash. But I'm betting that when this predator bushwhacks its prey it is quite fast at closing those last few yards between it and dinner.