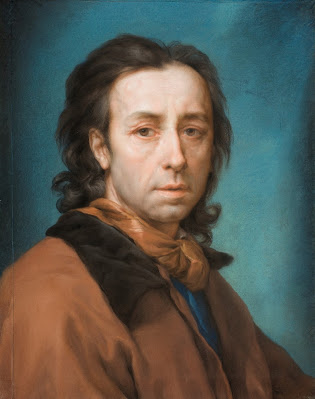 Anna Maria Teresa Mengs, portrait of Anton Rafael Mengs, c. 1780
"Guide cells" help flatworms regrow missing heads, bodies, whatever else they have lost. (NY Times)
One group of Southerners enjoyed the fourth of July in the 1860s: recently freed African Americans.
Video of dolphins "shelling" – chasing a fish into an empty conch shell, then carrying the shell up to the surface and shaking the fish out. Another sort of dolphin tool use, and another bit of culture, since this is done only by certain pods, the knowledge passed between peers.
Three recipes to help you eat like a Roman. Bonus: how to bake Roman bread (no leavening, which would have come in handy during the Great Yeast Famine of 2020).
Gigapixel image of a famous copy of da Vinci's The Last Supper. Unbelievable detail, and more authentic than the badly decayed and repainted original.
The 1947 sci-fi film that predicted how people would use smartphones; it even shows people bumping into each other while staring at their mini-televisions.
Indian Archaeologist searches two decades for medieval fort, which is then accidentally uncovered by workers "trying to extract mud from a foothill."
Bloomberg: lawsuits by activists and opposition by politicians have made it impossible to build new gas pipelines in the US.
Former Senator Judd Gregg reveals the perfidious left-wing plot afoot: Joe Biden is just a stalking horse for the far left, and as soon as he is elected they will 25th Amendment him out of the way and bring a radical in to replace him. Never mind that Biden trounced all the leftists in the primary, and never mind that his VP is not likely to be much more radical than he is.
What happens when an African grey parrot goes head-to-head with 21 Harvard students in a test measuring a type of visual memory? The parrot wins.
The fight continues over Anne Rice O'Hanlon's mural at the University of Kentucky; in a perfect summary of the problem, the Times notes  that "students have denounced the mural as a racist sanitizing of history and a painful reminder of slavery in a public setting." No one has figured out how to depict a non-sanitized, non-painful version of our history.
Indian emperor Ashoka fell hard for Buddhism. In 257 BC he decided we all had to be more ethical, so he wrote little speeches urging everyone to be more ethical and had them carved on boulders, pillars, and cave walls all over India. It was worth a try, right?
Posted by John at 7:38 AM

"No one has figured out how to depict a non-sanitized, non-painful version of our history."

No one has figured out how to depict a non-sanitized, non-painful version of rape, torture, genocide, and the like either - but we also don't insist on putting said depictions in public spaces as monuments.

If you have to publicly memorialize something, you honor the victims, rather than representing the oppressors. But not everything needs a public monument, and not all locations and contexts for such monuments are appropriate.

The Vietnam War memorial is a good example. It doesn't honor the war or the opposing governments and armies, it honors the dead. And it also isn't located in the middle of a college campus where students going about their daily lives have no choice but to be confronted by it - it is instead out of the way, biblically accessible for those who wish to view it, but not thrust upon anyone against their will.

I don't know G. I think I like "biblically" better. There is a commitment to "accessible" that just isn't present in the word "easily." There's a feel of longevity to it too.