The Ideology of American Police 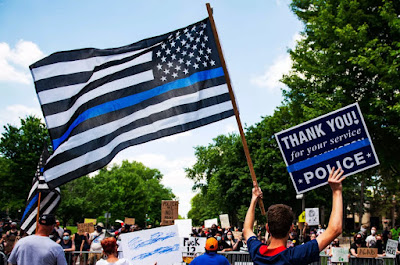 Good article by Zack Beauchamp at Vox about the unwritten beliefs that American police officers hold about their jobs:

The ideology holds that the world is a profoundly dangerous place: Officers are conditioned to see themselves as constantly in danger and that the only way to guarantee survival is to dominate the citizens they’re supposed to protect. The police believe they’re alone in this fight; police ideology holds that officers are under siege by criminals and are not understood or respected by the broader citizenry. These beliefs, combined with widely held racial stereotypes, push officers toward violent and racist behavior during intense and stressful street interactions.

I think you can't understand how the police behave without coming to grips with how they see the world. The emblem of this ideology is the "Thin Blue Line," which represents police standing between the good people and the dangerous criminals.
One reason police feel this way is that they are trained to be paranoid:

In 1998, Georgia sheriff’s deputy Kyle Dinkheller pulled over a middle-aged white man named Andrew Howard Brannan for speeding. Brannan, a Vietnam veteran with PTSD, refused to comply with Dinkheller’s instructions. He got out of the car and started dancing in the middle of the road, singing “Here I am, shoot me” over and over again.

In the encounter, recorded by the deputy’s dashcam, things then escalate: Brannan charges at Dinkheller; Dinkheller tells him to “get back.” Brannan heads back to the car — only to reemerge with a rifle pointed at Dinkheller. The officer fires first, and misses; Brannan shoots back. In the ensuing firefight, both men are wounded, but Dinkheller far more severely. It ends with Brannan standing over Dinkheller, pointing the rifle at the deputy’s eye. He yells — “Die, fucker!” — and pulls the trigger.

The dashcam footage of Dinkheller’s killing, widely known among cops as the “Dinkheller video,” is burned into the minds of many American police officers. It is screened in police academies around the country; one training turns it into a video game-style simulation in which officers can change the ending by killing Brannan. Jeronimo Yanez, the officer who killed Philando Castile during a 2016 traffic stop, was shown the Dinkheller video during his training.

“Every cop knows the name ‘Dinkheller’ — and no one else does,” says Peter Moskos, a former Baltimore police officer who currently teaches at the John Jay College of Criminal Justice.

Of course being a police officer is dangerous, but not as dangerous as being, say, a farmer or a bartender, and a lot less dangerous than logging or fishing. And according to numbers Beauchamp cites, nearly as many police die in car crashes as from violence, but while the police are obsessed with violence they are often careless drivers. For example, many officers won't wear seat belts because they think they might have to jump out of the car quickly to intervene in a violent situation.

Another important part of the ideology is the sense that nobody understands what the police go through:

Police officers today tend to see themselves as engaged in a lonely, armed struggle against the criminal element. Officers believe these efforts are underappreciated by the general public; according to a 2017 Pew report, 86 percent of police believe the public doesn’t really understand the “risks and challenges” involved in their job.

Rizer, the former officer and R Street researcher, recently conducted a separate large-scale survey of American police officers. One of the questions he asked was whether they would want their children to become police officers. A majority, around 60 percent, said no — for reasons that, in Rizer’s words, “blew me away.”

“The vast majority of people that said ‘no, I don’t want them to become a police officer’ was because they felt like the public no longer supported them — and that they were ‘at war’ with the public,” he tells me. “There’s a ‘me versus them’ kind of worldview, that we’re not part of this community that we’re patrolling.”

To me all of this means that the response to police violence can't be more demonizing of police offers; it has to be reintegration of the police and the communities they serve. So long as police officers feel like they have been stranded alone on the streets, surrounded by danger, while the people they protect revile them, they will continue to be violent.
Posted by John at 11:24 AM

Demonizing implies false and unjust characterization. The police are not demonized - they receive the public support they earn and deserve. They are trained to be paranoid militant thugs, and the public treats them as such because that is what they actually are. The solution isn't to demand citizens stop "demonizing" the police. The solution is to not train the police to act like demons.

Respect is earned, not owed. We need to purge the police of all the resentful veterans who refuse to admit their own failings and misdeeds, and replace them with new recruits who receive the kind of training that will earn respect as trusted public servants who view themselves as part of the community, rather than earn distrust as violent jackboots who view the public as enemies and criminals to be suppressed.