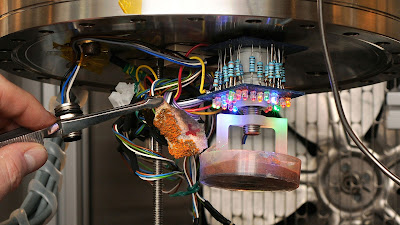 Fascinating article by Sarah Scoles in the Times about the secret history of 'Mars Jars.' These are small terrariums set up to mimic conditions on Mars, which are used to see whether Earth life could survive there. They were popularized by Carl Sagan and many people assumed that he invented them.
Not so! A bit of sleuthing by a young post-doc named Jordan Bimm turned up old films from the 1950s depicting what were called even then 'Mars Jars.' Their inventor, it turns out, was a government scientist named Dr. Hubertus Strughold. Strughold worked for the US Air Force on issues related to biology and high altitude or space conditions, and he his work on Mars was sort of a side line. But he eventually did enough to publish the first scientific paper using the word 'astrobiology' and also organize the world's first astrobiology conference. 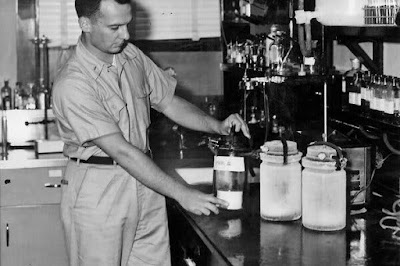 Besides having the perfect name for an evil mad scientist, Dr. Strughold turns out to have been an actual Nazi. He started his experiments on high altitudes physiology while working for the Luftwaffe. At the end of the war he was swept up by the US Army as part of Operation Paperclip and brought to America along with Werner von Braun and about 1600 other scientists and engineers.
What, exactly, did Strughold do?

Dr. Bimm studies the Cold Warriors who researched survival in the harsh environment of space. It’s what led him to the Mars Jars: He was diving into Dr. Strughold’s work on astronaut physiology and aviation medicine in the U.S. — work he had started in Nazi Germany for the Luftwaffe, and which was tangled up in inhumane experiments.

Dr. Strughold didn’t do these experiments himself, and he wasn’t a member of the Nazi party. But on his watch, researchers locked prisoners at the Dachau concentration camp in low-pressure chambers, to show what might happen to fliers at high altitude, and dressed them in fighter-pilot uniforms only to submerge them in freezing water.

“You don’t get to hold that job for 10 years unless you are 100 percent in lock step with the leadership,” Dr. Bimm said.

So Strughold was part of an organization that did awful experiments on concentration camp inmates, but there is no evidence that he participated in them. He did not join the Nazi Party but as Bimm says he would not have lasted in that job if he had not been considered politically reliable.
Scoles tosses around vague talk about "reassessing" the use of Strughold's research, but I find it hard to get upset about this. The Space Medicine Institute used to give out a Strughold Award, and when Strughold's Nazi past first came to light in 2013 they retired the award. Perfectly appropriate. But so far as I can see from this evidence Strughold was not Mengele, and whatever he did in Germany he developed Mars Jars in the US, torturing nobody but lichens and bacteria. I see no reason to stop messing with Mars Jars just because of their inventor's past.
Incidentally what these experiments show is that most of the time, earth life dies in Martian conditions, but sometimes lichens endure, and sometimes bacteria mutate and adapt.
Posted by John at 1:54 PM

"Besides having the perfect name for an evil mad scientist, Dr. Strughold turns out to have been an actual Nazi. He started his experiments on high altitudes physiology while working for the Luftwaffe. At the end of the war he was swept up by the US Army as part of Operation Paperclip and brought to America along with Werner von Braun and about 1600 other scientists and engineers."

In briefly researching the man, it seems clear he was guilty of experimentation that we in the modern day clearly find unethical, but so we're plenty of American and Allied researchers of that era, particularly in fields where the military had influence, funding, and interest in achieving certain results.

He was not a member of the Nazi party, and the actual research he personally was involved in was relatively "tame", and thus wonder if it is fair to say he was "an actual Nazi".

He didn't volunteer to work for the Luftwaffe - they bought out the civilian firm he worked for. It does seem clear that he didn't publically object to the Nazi regime, but he would hardly be the first German scientist who felt their responsibility was to furthering science without regard for politics, and agreed to work for the Reich as a pragmatic means of securing unprecedented funding, materials, and access to other scientists and their data. The popular sentiment among many prominent German scientists at the time was "make use of war for physics".

You can find the same sort of thinking among our own researchers of the time - for example, some members of the Manhattan Project were involved purely to advance science, and were horrified when the bombs were actually deployed on human victims, as they had imagined a simple weapons demonstration would be enough to make our opponents surrender in the face of unmatchable destructive power. Others simply didn't have any ethical qualms about obliterating hundreds of thousands of innocent civilians, or made excuses and fabricated justifications to make seem moral, and we seldom condemn those figures.

Strughold seems unworthy of serious condemnation - likely just a cynical opportunist dispassionately exploiting the political situation around him to continue work on his pet interests, no more or less guilty of unethical science than many of our own researchers of the war era (and well beyond). He didn't use U.S. soldiers as guinea pigs to study the effects of nuclear fallout, didn't infect Guatemalan mental patients with syphilis and gonorrhea under the guise of vaccinations, didn't test biological warfare agents on U.S. soldiers, didn't carry out the forty year long Tuskegee syphilis experiment and withhold true diagnosis and treatment from innocent African Americans, didn't carry out Project MKUltra, etc, etc, etc...

Mild condemnation? Sure. But the man is long dead, and his Martian ecology terrarium are utterly innocuous. There are far better things to take offense over.