Troublesome Immigrants from Africa to Europe: the Golden Jackal 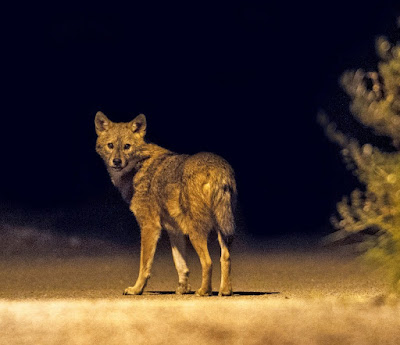 Fascinating article by James Gorman in the Times about the golden jackal, a 20-pound predator native to Africa and the Middle East that has been spreading into Europe since the wolves were nearly exterminated in the 1800s. The spread has accelerated in recent decades and now there are more than 100,000 jackals in Europe, compared to fewer than 20,000 wolves. They are most common in the Balkans, especially Bulgaria and Greece, but they have been spotted across the continent.

I guess the jackals are following the same path as coyotes in North America. Their smaller size allows them to survive more easily among people, and the absence of wolves (who hunt and kill both coyotes and jackals) leaves a predatory niche open for them to exploit.
Posted by John at 8:56 AM

If they're actually referring to the species native to Africa (Canis anthus), that's more properly known as the African golden wolf.

But if they're actually referring to the Golden jackal (Canis aureus), then they're confused about its being from Africa, as it is actually a Eurasian species not found in Africa, and which has historically already been in Europe for a rather long time.

Clicking through to the link doesn't help, because they never actually identify the species scientifically (very professional, New York Times, great journalistic standards). The provided photos are also all unhelpful in terms of telling which of the two very similar looking species is involved - every shot is compromised somehow, be it through distorted lighting making true coloration hard to determine, or simply the animals being largely not visible due to concealment.

No matter what, the article is wrong one way or the other. My suspicion is these are the Eurasian species of Canis aureus, as that is simply the more likely scenario given the facts, and I imagine the author simply didn't perform due diligence in fact checking to learn that there are multiple species with "golden jackal" as a common name.