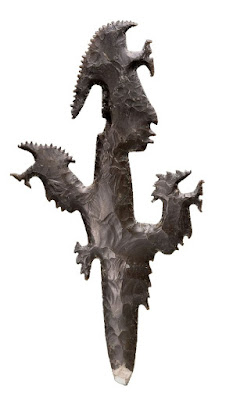 There was across the history of all humans a Stone Age, when stone was the supreme material for tools and weapons. The first technique for shaping stone was flaking or knapping, which essentially means breaking smaller pieces off a bigger one by striking or pressure until the desired shape is achieved. But although humans made stone tools by flaking in every part of the world, in only one place did they use this technique for sculpture. That was in Central America, where the Maya and some of their neighbors made the objects we call "eccentric flints." 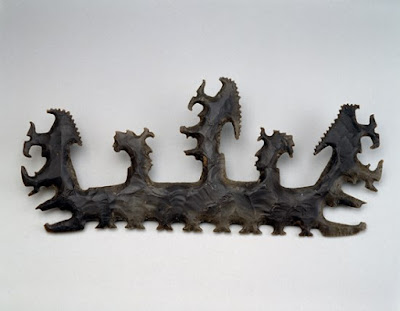 Eccentric they certainly are. Objects like this were too fragile for any sort of hard use, like, say, carving the hearts out of sacrificial victims. Some may have been used for bloodletting -- loss of blood was one way Maya shamans achieved ecstasy -- but most were probably ornaments. 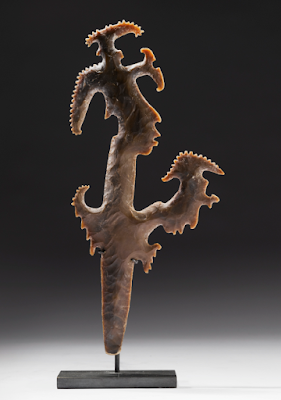 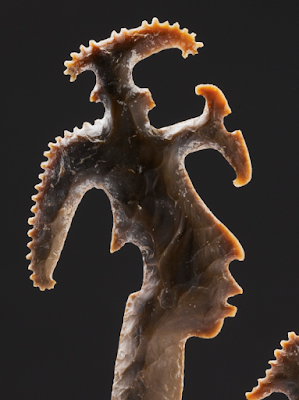 This one was sold by Sotheby's a few years ago for $134,500. Its place of origin is not known because, like so many works of Maya art, it was dug up by looters rather than archaeologists; the best Sotheby's could do was "Late Classic, ca. A.D. 550-950, probably Guatemala." (It had been in the US for decades, since before export was illegal; the good legal title probably explains part of the high price.) They call it a "ceremonial scepter." It depicts, like many of these, the God K'awiil, the Lord of Lightning; you can recognize him by the smoking pipe that emerges from his forehead. 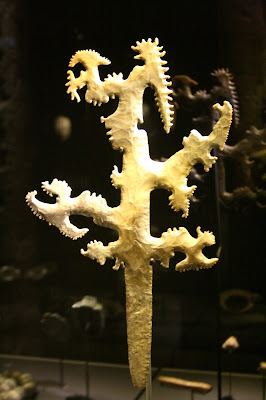 Stone tools are associated with lightning all over the world; you may have heard that medieval Europeans called stone axes "thunder stones" and put them under the roofs of their houses to keep away lightning. This association is so ancient and widespread that some archaeologists think it was part of the original mythology that the first humans brought with them out of Africa. 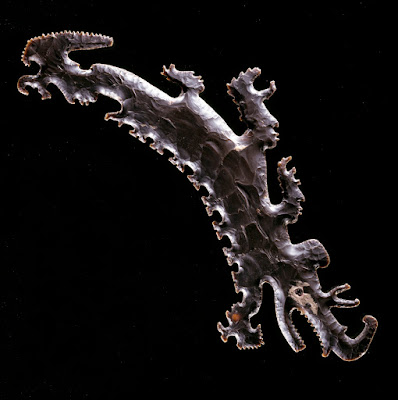 This famous example shows K'awiil as the crocodile god, one of his avatars. 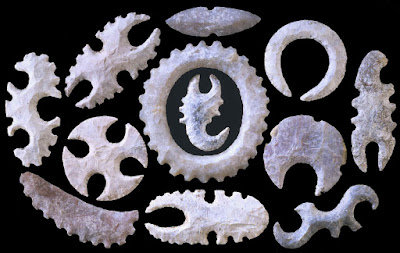 Not all eccentric flints are quite so elaborate; many more actually look like these.

I have never read a convincing theory of why the Maya in particular should have been so into strangely-shaped flints, but perhaps it did grow out of their obsession with sacrifice and bloodletting, which led them to develop gorgeous stone daggers like this famous Mixtec example. 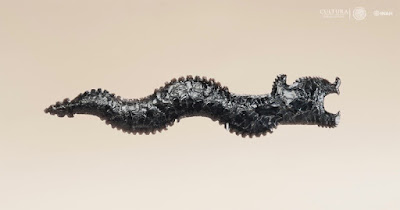 Here is one from Teotihuacan, one of the few famous non-Maya examples. 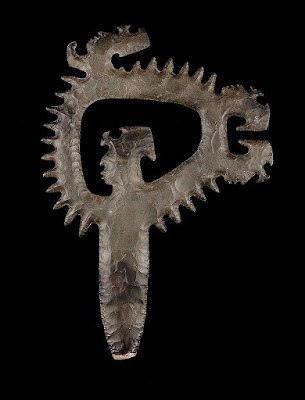 What strange and amazing things.
Posted by John at 8:37 AM