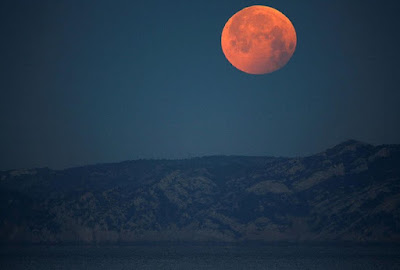 As America got all excited about the Super Wolf Blood Moon, I, the resident pedant, asked myself, "In what culture is the January moon called the Wolf Moon anyway?" I mean, I'm a huge folklore nerd, and I can't remember hearing of the Wolf Moon before.

It isn't Germanic; the old German calendars call this either "Winter Month" or "After Yule." It isn't Celtic. It isn't Roman or Greek or Chinese.

All the popular web sites ginning up enthusiasm for the Super Wolf Blood Moon refer to the Old Farmer's Almanac, which is a dubious source but does include some old American lore, much of it drawn from Indians. American Indians certainly did name the moons. However, none of the versions I am familiar with have a Wolf Moon in the winter. Most of the eastern tribes called it something like Ice or Cold or the Sun is Weak or The Moon of Staying Inside. So I did a bit of searching and found this site that lists a whole bunch of Native American calendars (e.g., Choctaw, Moon When the Old Fellow Spreads the Brush; Pueblo, Moon of the Cedar Dust Wind), but precious little about wolves. The Potawotami call the moon after midwinter the Bear Moon, I suppose because that was when they hunted hibernating black bears; in other calendars, and the ethnography of the Cherokee, that is February. The only calendar on this site that mentions wolves is a generic "Sioux" list that has Wolves Run Together for January, but since Sioux is a name for a language family, not a particular tribe or tradition (Lakota is Hard Moon), I am skeptical of the provenance.

This astronomy site says Wolf Moon is Ojibwa, but all the other sources I have found say their January moon was called The Great Spirit Moon, so again I am dubious.

I am not denying that some Native people somewhere, sometime called the January moon the Wolf Moon, but obviously it was not the most common name. Many more people named this month for its most obvious characteristic, the temperature. This whole business of the Wolf Moon seems to have been gotten up by nineteenth-century publishers to sell almanacs.

I've learned one single, unshakeable law of history - when in doubt, the Victorians made it up, or at least heavily embellished it.