Lapis in her Teeth 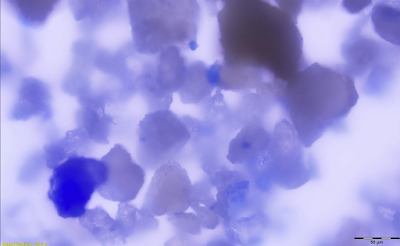 Interesting news about an artistic nun:


Traces of ultramarine — a vivid blue pigment ground from the mineral lapis lazuli, mined only in Afghanistan and once as prized as gold — were detected in plaque coating the teeth of a woman who died in western Germany about 1,000 years ago. . . .

Motes of pigment in the woman's teeth suggest that she may have helped illustrate some of those magnificent books, and are the first direct evidence linking ultramarine to a medieval woman. It adds to a growing body of evidence hinting that women were proficient scribes even during the earliest days of medieval book production, the researchers reported.

The woman was buried in an unmarked cemetery near a monastery complex that stood from the ninth century through the 14th century. Radiocarbon dating indicated that she lived around 997 to 1162. She was middle-age when she died, about 45 to 60 years old, and her burial location suggested that she was a pious woman, according to the study.

Further examination of her bones told the researchers that her overall health was good and that she did not perform prolonged hard labor.

She may have been an illuminator herself, or she have prepared paints for others, but either way it points to the production of high-end illuminated manuscripts in the nunnery at Dalheim.
Posted by John at 12:07 PM