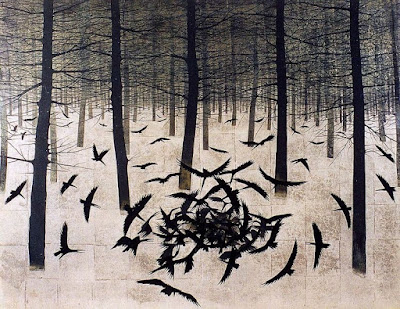 I found this amazing image making the rounds of art blogs on Tumblr and had to find out more. It turns out to be a painting by Japanese artist Matazo Kayama (1927-2004), titled Frozen Forest. I love the fairy tale quality and the way it evokes violence with the swirl of the bird figures, with showing any gore. 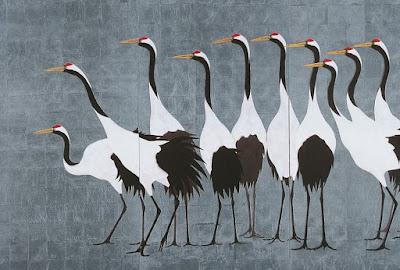 Kayama was a successful artist and I had actually seen his work before -- I immediately recognized Cranes, 1988, above -- but I knew nothing about him. 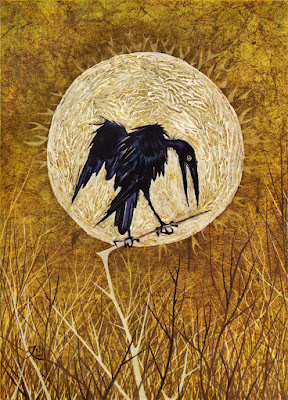 He came from an artistic family, son of a designer of Kimonos, and he grew up in his father's Kyoto studio. I imagine that a kimono designer in pre-war Japan had ties to the royal family or at least the upper aristocracy, and I wonder if that explains how he was able to keep studying art as World War II raged around him and through the lean years after the fighting stopped. 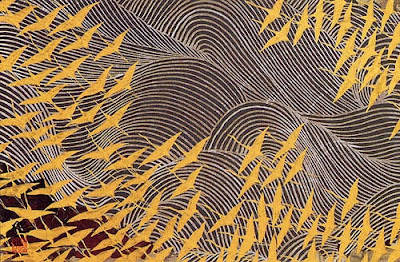 Kayama studied both western and Japanese art, and it shows. A work like the one at the top of the post has a strong western flavor, but Kayama also made many wonderful screens like this one, A Thousand Cranes (1970).

Kayama was very successful in the 1950s and held his first solo show in New York in 1961, but I haven't found any images from his early days. Floating Moon. 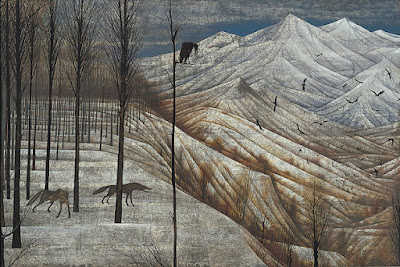 I think many of the pictures on the web come from a big retrospective show that toured the US and Japan in 2009. I love Kayama's style, and I am happy to have stumbled onto his paintings. 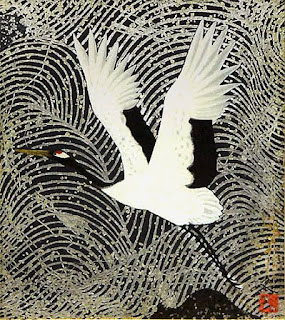 "I imagine that a kimono designer in pre-war Japan had ties to the royal family or at least the upper aristocracy, and I wonder if that explains how he was able to keep studying art as World War II raged around him and through the lean years after the fighting stopped."

Out of curiosity, why do you imagine this?

Kimonos were still the predominant form of dress for the average person in Japan throughput World War II. They were incredibly common everyday garments, even in cities, and existed side by side with more Western garments.

I would actually hazard to suggest that being a designer of kimonos at this time made you LESS likely to have some sort of connection to the royal family, not more, because the wealthier and more influential you were in Japan, the more likely you were to wear Western style clothing, due to its association with modernity, power, and importance. If you search for photographs of Emperor Hirohito, for example, the vast majority of the time he is either in a three piece suit or a military uniform.

That's not to say that there weren't people designing very expensive, high prestige kimonos for the wealthy. But unless there's some specific detail to suggest a connection to the royal family other than simply being a designer of kimonos, then we really don't have any good reason to suspect such a conncetion.

It'd be like imagining that anyone who was a fashion designer in Washington DC during the war must have intimately known President Roosevelt, simply based on their profession. Something of an absurd conclusion to leap to, no?