Refugees and the Syrian End Game 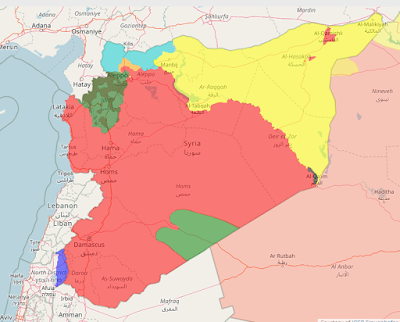 The civil war in Syria is winding down across much of the country, because the government has won. As you can see from the map above, the government (red) now controls all the inhabited areas in the south and center of the country and is slowly constricting the remaining rebels in the north. What remains of Aleppo is in government hands. The yellow area is under the control of Kurdish militias and their American advisers, and so far the Kurds have remained mostly at peace with the government.

So especially in the south those communities that have been hosting thousands of Syrian refugees are eager to see them go home:


Seven years of war in Syria has displaced more than half the country’s population, leaving millions of refugees shipwrecked between the wasteland of home and the void of exile. Among the many Lebanese and Jordanian towns that received them was Arsal, where rented rooms and tent cities overflowed at one point with 120,000 Syrians — quadruple its Lebanese population.

But with the Syrian government closing in on victory, President Bashar al-Assad declaring the country safe for Syrians again and their reluctant Lebanese hosts pressing them to leave, the Syrian refugees are now beginning to set out on the fraught road home.

Over the past month, convoys carrying nearly 2,000 Syrians have crossed the border, returning families to the homes they had abandoned years ago — though few knew whether those homes had survived the bombs and shells.

I consider this great news. On the other hand certain other news shows why so many Syrians hate the Assad regime so much, and why western governments keep saying that the problem can't be solved so long as Assad remains in power:


But many may be stuck in Lebanon. Thousands of Syrians in Arsal have applied to return, only to be rejected by Mr. Assad’s government. Many more say they believe that if Mr. Assad remains in power, the outcome tacitly accepted by the global powers haggling over Syria’s future, they have only arrest, torture, death or forced conscription to return to.

“Here, I’m a refugee,” said a former Syrian soldier who asked to be identified by his nom de guerre, Abu Fares. “In Syria, I’m a traitor.”

So at least for the next few years, many refugees will be unable to return even if they want to. I suspect that European countries in particular will put pressure on the regime to change this policy as the central plank in any peace settlement, but for notorious regime opponents there won't be anything they can do.

The other big question to be resolved in any peace settlement will be the Kurdish areas. The government can't conquer them so long as thousands of Americans remain in place, nor will the US support outright independence for the Kurds. So I suspect a stalemate like the one in Iraq is inevitable. Since right now the Kurds and Americans control big areas where the people are all Arabs, maybe a deal can be worked out in which the Kurds withdraw from the Arab areas in return for recognition of their autonomy in the areas where they are the majority. I hope so.
Posted by John at 8:01 AM