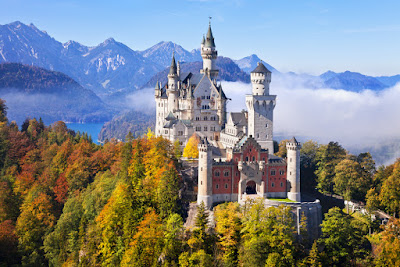 Léo Larguier wrote this essay in 1911 about Ludwig the Mad of Bavaria, the nineteenth-century king who built three amazing castles before being forced to abdicate when Bismarck engineered the unification of Germany under Prussian leadership:

Was he really crazy, this Louis II who drowned himself in Lake Starnberg? No, only a diehard romantic. . . . When a man is only one in the midst of thousands of men, idealism, along with a taste for silence and fantasy, singles him out for praise; when that man is a king, it becomes terrifying, as his case proves.

He, King of Bavaria, Prince Palatine of the Rhine, lived alone, having neither queen nor favorite, in a country where large families were esteemed; he did not drink beer, even though he lived all his life in Munich; he loved champagne and France, and he did not hide his tastes even at Versailles, when the two white coats and barbarous helmets of Bismarck and Field-Marshal Moltke could be seen in the shadows. . . . 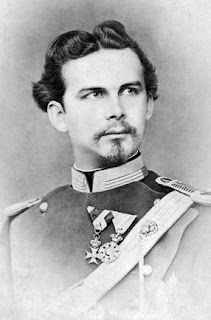 He never saw it. It is necessary to be crazy, is not it, to live alone and far from everyone.

Were the good Bavarian officials invisible, then? Well fed with cabbage, goose and sausages, well watered with good beer, in a dress without elegance but solid, with their good wives and their many children, they went to listen, on Sunday, to the music under the linden trees, and God blessed them and gave them each year a red-haired boy or a blonde girl.

So was the king one of those good people? They never knew.

He did not appear at court galas, nor at festivals in the city. He preferred the meditative intoxication of the vast loneliness of the mountains. 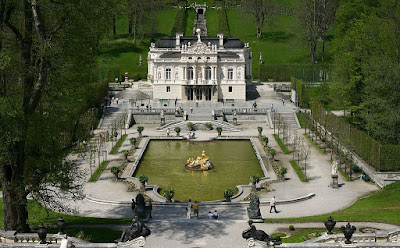 Sometimes he would call his servants at two o'clock in the morning to ready a golden Louis XIV carriage, and white horses that he called by name, and in the illuminated car, rolling heavily on the slopes. escorted by riders carrying torches, one saw as in a dream or by a flash of lightning, the young king meditating in an immense blue cloak! He thus went off on adventures, with this strange and sumptuous crew.

Sometimes he stopped before the humble house of a peasant who adored him, asking for a glass of ice water that a girl half asleep came to offer him at the door of his carriage, then set off again.

He also liked to lie down in the diamond-dewed grass, leaving his servants and the illuminated car on the night road, spending hours at the bottom of the Tyrolean chasms, by cold lakes where the stars were drowning.

This prince palatine of the Rhine was a fairy king; he must have reigned in times of chivalry and legend over a kingdom of  deep valleys, snowy peaks, and blue ponds, sovereign of the forest of elves and the pale pools where Lorelei haunted. 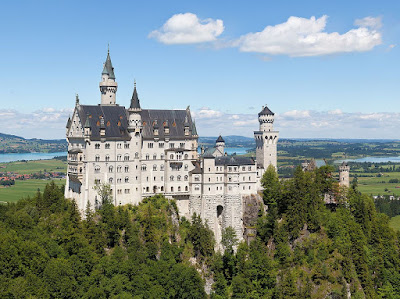 He was one of those unrepentant dreamers of ancient Germany, the Germania of oaks, linden trees, and black forests; the old idealist Germany that believed one could meet Mephistopheles in a tavern fogged by pipe smoke, and that shuddered when they remembered dreams of Walpurgisnacht!

Born too late, in the time of Bismarck and the Prussian conquest, he had abdicated in his heart long before he was dispossessed.

Serious business did not interest him. He hated the grim old counselors, he did not want to see his ministers, especially if they were too ugly, but he built castles on virgin peaks, and when he arrived in Triebschen, without escort, like the most humble, the most dazzled fan, he slept in a camp-bed set up for him in Richard Wagner's study, in this oratory, with heavy furniture, and always perfumed with the extract of white roses. His kingdom was not of this world, as was proved to him.

"Sometimes he stopped before the humble house of a peasant who adored him, asking for a glass of ice water that a girl half asleep came to offer him at the door of his carriage, then set off again."

A glass of ice water? Procured from a peasant, in the middle of Bavaria?

True, this was the heyday of the global ice trade - but as I understand it, the majority of that trade both originated and culminated in places quite far removed from southern Germany, no? Primarily it was shipped to coastal cities near ports, or inland cities near major railroad lines, yes?

What is the likelihood that a Bavarian peasant girl who lived in a "humble house" not only had the means to purchase ice (or perhaps harvest it personally in winter in the Alps?), but also to store it long term (presumably in an underground cellar with lots of insulating sawdust or straw?), and also kept at least some of it as pieces small enough to be placed into a drinking glass in short order upon request at any hour of the day that this mad king might choose to arrive, given that we're told he was known to call for his couch at two in the morning and fly off on a whim?

And what, then, is the likelihood that this story is instead a fanciful fabrication, particularly given the fanciful subject?

I suspect it was arranged in advance by his servants.

Would such a thing escape Ludwig's notice, though?

He doesn't seem the "Let them eat cake" type, and presumably would recognize even a minor luxury resource coming from a peasant would still be odd, yes? Then quite naturally he would inquire about it, and consequently it would be revealed that his ministers arranged it on his behalf?