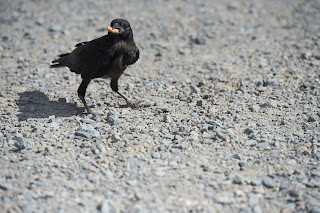 Crows can do lots of interesting things:


Puy du Fou, a historical theme park in the Loire region about four hours from Paris, has trained six crows to pick up cigarette butts and bits of trash and dump them in a box. . . .

The theme park’s owners would rather have humans properly dispose of their own candy wrappers and cigarettes. The crows are part of an educational campaign to prompt the ecologically minded to take their rubbish with them.

“We want to educate people not to throw their garbage on the ground,” said Nicolas de Villiers, the president of Puy du Fou. That is especially true of smokers who casually flick lit cigarettes and extinguish them with the tips of their shoes. As Mr. de Villiers put it, if crows can be schooled to pick up trash, why can’t humans?

The crows are rewarded with food for this but according to their trainer they do it for fun, as a game, and quickly get bored if they are asked to do it too much.
Posted by John at 7:45 AM