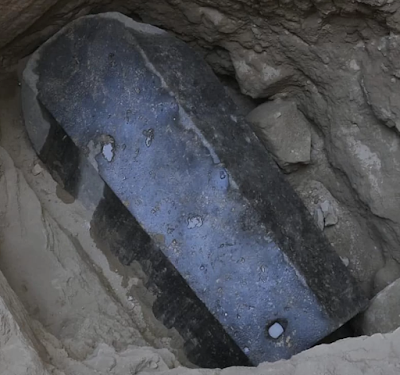 That large black granite sarcophagus found in Alexandria, Egypt earlier this year is now being opened and studied. 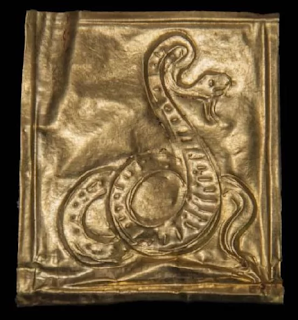 The most intriguing objects so far are these three small gold plaques. Assuming these images were carefully chosen, which I think is a fair assumption, they say something interesting about classical paganism. First, this snake. Because snakes shed their skin and emerge looking youthful again, and because they emerge mysteriously from underground hiding places in the spring, they were often associated with death and rebirth. They were also sacred to Isis, probably the most widely worshiped goddess in Egypt at the time. 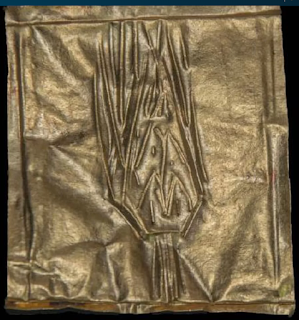 An ear of wheat. Wheat was central to many ancient religious rites, including the famous Eleusinian Mysteries of Athens. Wheat was symbolic of fertility, and of the birth of new life from dead ground. 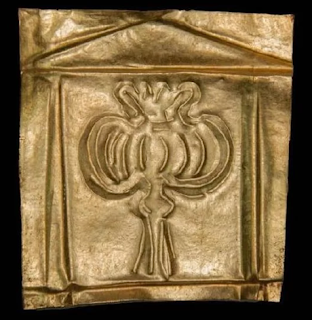 A poppy seed head, enclosed in a shrine; most likely this represents an opium poppy although one can't be sure. Opium was symbolic of both death and sleep, and therefore perhaps of the hope that death was only a sort of sleep, with reawakening to follow.

I see here a hopeful view of death, not a bleak one; a belief that rather than a final end, death is a transition to new life in some form or another.
Posted by John at 7:50 AM