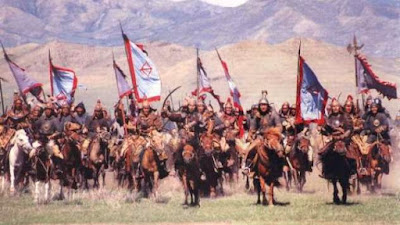 I just finished reading a so-so book about Genghis Khan and the Mongol Empire. I kept at it because it had been decades since I last read about this period, and these were very important events in the history of China, the Middle East, Hungary, and everywhere in between. But it was hard going. Letting the book fall open to an entirely random page, I read this:


For two days the attackers battered away without major success, but then the nerve of the Turkish commander cracked. He led his 20,000 men out in a night sortie and almost got clean away, but they were detected and pursued to the banks of the Amu Darya, where they were massacred. At this the city surrendered, all but four hundred loyalists in the citadel. Genghis ordered the citizens to fill up the moat around the citadel, then brought up heavy catapults which breached the walls. Even so, the defenders managed to fight on for an amazing eleven days before they were finally taken and massacred.

Genghis decided to make an example of Bukhara that would cause the rest of the shah's empire to tremble. [First, the Mongols identify the 280 richest men in the city and seize all their wealth.] Then an order went out that all people of all ranks had to leave the city in just the clothes they stood up in, with the exception of nublie women, who were then sacrificed to his licentious soldiery in an orgy of mass rape. Young males were corralled for use as human shields in the next battle or siege, while artisans and crafsmen of note were sent to Mongolia.

On and on it goes for 500 pages, a dismal 40-year chronicle of wars, sieges, massacres, executions, poisonings, slaughters, rapes, more massacres, more battles, more sieges, and more massacres. The numbers of killed are fantastic: 30 million dead during the Mongols' 25-year conquest of northern China, 7 million in Persia, 500,000 in Russia. The numbers are not reliable but they do represent serious attempts to come to grips with what the contemporary sources show us: death in battle, death by massacre, death by starvation and disease in besieged cities, death of refugees driven from their homes, death in floods caused by deliberately broken dykes, death by suicide and despair. All across Asia chroniclers report gigantic piles of skulls around empty, broken cities; battlefields covered with bones, where so much human fat soaked into the soil that it remained greasy for a generation; whole districts so devastated that they did not recover for centuries. Bukhara, the city whose fate is described above, is said not to have recovered its pre-Mongol population for 400 years. Nearby Samarkand, sacked twice, remained a shell of its former self until it was refounded by Tamerlane in the 1380s, 160 years later. 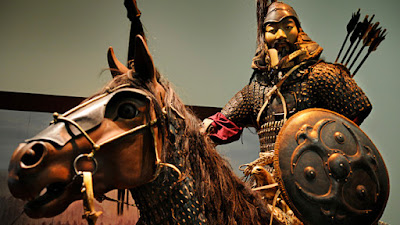 Again and again the Mongols triumph in battle against enemies with more money and more men. They are fiercer, braver, more determined, and more skilled. Their generals are better, their soldiers more disciplined. They ride farther and faster, in any weather. They can split their armies into two or three groups operating hundreds of miles apart, but using their amazing messenger service their commanders keep in constant touch and repeatedly bring their scattered forces together with shocking speed to overwhelm their foes. When they first invaded China they were amateurs at siege warfare and struggled to take cities, but after a decade of experience they were among the art's most skilled practitioners. Even greater was their skill at duplicity; repeatedly they took advantage of faction and foolishness among their enemies, luring them into ambushes, waiting for their discipline to crack before swooping in, inviting one part of an opposing force to join them in slaughtering the other, then turning to slaughter the turncoats who had trusted them. They promised dozens of cities that if the people surrendered, they would be spared, but once the people had been disarmed and marched out of the gates the Mongols killed them all.

For 40 years, no one could stand against them.

And in the evolutionary sense, the Mongols were winners like few others. You have probably heard that a Y chromosome variant shared by 13 million men across Asia almost certainly comes from Genghis Khan's family, and if lesser Mongols did not do so well, they certainly did better than all the men they slaughtered.

It's a grim lesson in what life might be like, and why we need to constantly be working to keep it from becoming that way in our own time.

The context that hasn't been touched on here is that Genghis Khan rose to power and began his conquest because he was rebelling against the injustices of his own culture and society. He had a brutal upbringing, betrayed and abused and exploited over and over again by those in power, and it drove him to radicalize.

He saw such monumental success because he was able to appeal to the common Mongol, and to unite a shared culture group that previously had been riven by infighting. He challenged the traditional nobility, seeking to abolish the heirarchy of Mongol society and make everyone "equals" - or at least, much closer to it.

When he defeated another Mongol tribe or clan, instead of just pillaging them and riding away to raid them again later as was usual in his society, he acted to permanently absorb and integrate them into other tribes and clans. The warriors who could be recruited safely were added to his armies, those that might be disloyal were killed so they would never be a problem again.

The women, children, and elderly of a defeated tribe were taken in by one of the victorious tribes as honored family, and treated relatively well. This was actually a step up for the common Mongol. They already lived in a society where it was expected that rival tribes would come raid them and steal their wealth and women away from them. Now, entire families were stolen away together, with children being allowed to stay with their mothers, and since they were now part of the same tribe as their conquerors, they had all the protections of tribal law that they normally wouldn't receive as members of another defeated tribe.

Genghis also overhauled the system of war spoils, and did away with the traditional hoarding of stolen wealth by the noble elites. Common warriors who joined him could be assured much better looting rights than they ever would have had before, and this also had the effect of raising quality of life for the average person. Even conquered tribes were enriched, because they were absorbed into victorious tribes, and got a decent portion of the loot of every conquest to follow.

Genghis was the Napoleon of his time and place. He inspired the common man with a mixture of nationalist zeal and enlightened self interest, and once he had united the Mongol tribes under one banner, he then took them on the warpath to other parts of the world.

He had been happy to absorb other Mongols into his forces and give them a generous share of the wealth they won in battle because he wanted them as experienced steppe warriors in his armies. But the Chinese? The Persians? The Turks? They were of no use to Genghis except as sources of loot for his loyal followers. They didn't speak his language, practice his customs, or even fight wars the same way he did. They could never be absorbed into his new society, and so they existed purely to be raided.

Imagine, then, if none of this ever happened. If young Temujin had lived in a society that didn't tolerate his mother being stolen from him as a child, and tribal law offering him no protections or recourse for justice. If instead of growing up with a burning hatred and bitterness that would inspire him to remake the world by any means necessary, he had instead led a simple peasant life with reasonable protections of his rights, and been more or less content.