Eudoxio Rodriguez and the Possibilities of Internet History 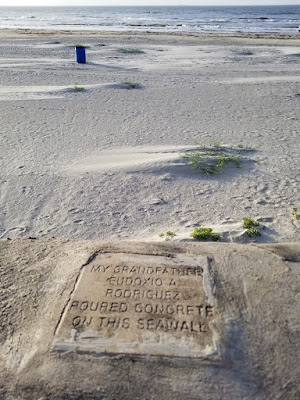 Dead Confederates recently posted this picture of an 8-inch square unofficial memorial attached to the Galveston Seawall. Just as interesting was how much he was able to learn about this Mexican-American laborer on the internet:


A quick check of online genealogy resources and newspapers tells us that Eudoxio “Eddie” Rodriguez was born in Mier, Tamaulipas, Mexico in November 1881, emigrated to the United States in 1899 or 1900, and soon thereafter was working as a laborer on building the Galveston Seawall, around 1902-03. In 1910 he was still in Galveston, working as a day laborer. He was apparently active in community affairs, as in 1926 (still living in Galveston), he was elected to the post of Treasurer of the a local Woodmen of the World lodge. By 1940 he was head of a large family, owned his own home at 3814 Sealy, and was working as a bottler at the Galveston-Houston Brewery. It was a solid job, that he reported in the 1940 Census had paid over $1,800 the previous year – not a small thing, coming out of the Great Depression. (His eldest son, 26-year-old Philip, lived with the family and made almost as much as a tank cleaner at the brewery.) The average income reported in the census in 1940 (the first to record that information) was $1,368, which places the Rodriguez pretty squarely in the lower middle class. In 1942, at the age of 60, Eudoxio registered for the “old man’s draft” for military service. Eudoxio Rodriguez died in Houston in 1959. A funeral mass was held Sacred Heart Catholic Church in Galveston, and he was interred at Old Catholic Cemetery, just off Broadway in Galveston.

Online genealogical sources are enabling a drastic acceleration in how much we can learn about the ordinary people of the recent past. In one way this is a little sad, since it is generally unnecessary now to leaf through moldering tomes of local records in search of your great-grandfather's name, but on the other hand the amount that you can learn from just a quick internet search is sometimes amazing.
Posted by John at 1:06 PM