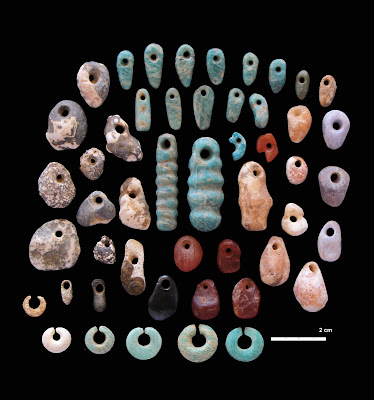 
Roughly 5,300 years ago, a group of ancient sheep herders in East Africa began an extraordinary effort to care for their dead.

It was a time of great upheaval in their homeland. Global climate changes had weakened the African monsoon system, causing a significant drop in rainfall. Pastoralism spread south from the Sahara. What is now known as Lake Turkana in northern Kenya shrank by half over the succeeding centuries.

These early herders dug through about 1,000 square feet of beach sands down to bedrock and gouged out burial pits. They interred their dead there: the bodies of men, women and children of all ages, many with personal items and ornamentation.

When the crevices they had dug into the bedrock filled up, the herders piled bodies on top of the pits, carefully placing large rocks over the heads and torso of each corpse. They did this for about 700 years, burying at least 580 people and perhaps 1,000 in all.

The great drying they mention went on in northern Africa until the Sahara ended up almost entirely desert, so this was indeed a major climate event. At top, stone pendants and earrings from the site; below a view of the site, with the main platform in the foreground and smaller platforms behind. Sadly all the pillars have fallen. 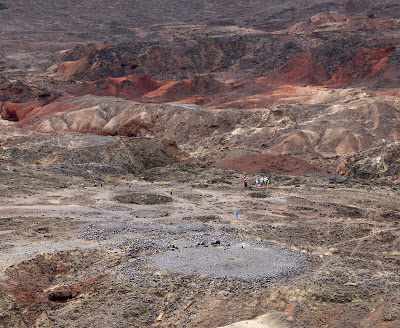 Which is all very cool. But in the way of archaeologists seeking attention, the excavators (led by Americans Elisabeth Hildebrand and Katherine Grillo) go on to make a bunch of assertions that are not true. From the abstract:

Sigh. If you're looking for monumental funerary architecture, it would be hard to beat the Scythians, nomadic herders whose gigantic mounds full of gold have made many appearances on this blog. In fact some people have argued that herders, lacking cities, are particularly prone to building impressive tombs. This has all been known to western science since Herodotus wrote about it in 450 BC. But in our world any scientist who wants a story in the Times has to invent some outdated orthodoxy to attack, so he or she can be a bold rebel overturning the status quo.
Posted by John at 7:40 AM