The King of Glass 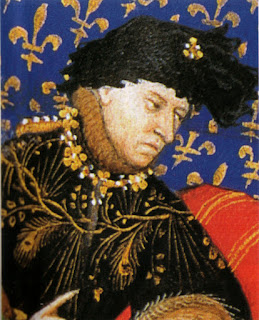 Part I: The Royal Brother

The King of Glass was Charles VI, King of France from 1380 to 1422. We'll get to him in a minute. But first consider his brother, Louis, Duc D'Orleans, a notorious rake who was rumored to have a secret chamber in which he kept portraits of all the women he had seduced.


Around the beginning of the year 1392, Louis fell in love with a beautiful young girl and offered her a thousand gold crowns if she would sleep with him. But before he could consummate the affair his own wife, Valentina Visconti, learned of it. She summoned the girl and threatened her so severely that the terrified girl went into hiding. Louis, angered and mystified by her sudden disappearance, blamed a chamberlain he had confided in, Pierre de Craon, and had him banished from court. Craon in turn heard that Olivier de Clisson, the constable of France – the king's chief military officer – had been responsible for his disgrace. On the basis of this hearsay, he secretly returned to Paris, rented a house there, and staffed it with hired thugs. Late one night, he and his men tried to assassinate Clisson but succeeded only in wounding him. Craon fled to the court of the Duke of Brittany, who refused to give him up to the king. King Charles, outraged at the attack on his constable and at Brittany's protection of the culprit, raised an army to bring the rebellious duke to heel and Craon to justice. 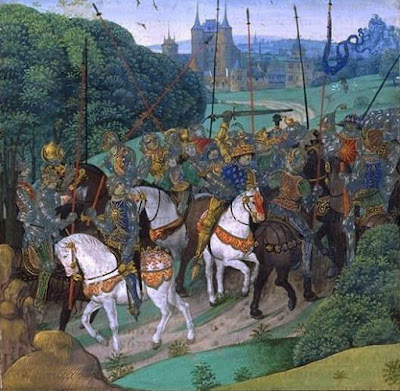 Thus it was that King Charles found himself, on a very hot day in August, 1392, leading an army to Brittany. As they rode through a forest near Le Mans,


A man leaped out from behind some trees and into the king's path. Bareheaded and barefoot, he had a long, scraggly beard and wore a dirty white smock. Some said later that he was a leper or a madman. Seizing the bridle of the king's horse, he shouted: "King, ride no further! Turn back, for you are betrayed!"

As Charles glanced in alarm from this strange figure to the forest around him, the royal procession stopped in its tracks, the line of troops bunching up as the king's entourage blocked the way.

In seconds, the king's infuriated attendants leaped upon the man and began beating and kicking him to make him release the king's horse. Soon he let go. Eluding the king's men, he ran back into the woods, where he continued shouting as before: "Turn back, King! You are betrayed!"

The man kept this up for half an hour, then disappeared back into the forest shadows as mysteriously as he had appeared. During this time, no one interfered with him. The king rode on in silence, apparently brooding over the strange encounter but showing no sign of fright or hesitation about continuing.

Later on the royal army emerged from the forest onto open ground, where they spread out because of the dust. With the king rode his brother Orleans.


Two royal pages rode behind Charles, one carrying his polished steel helmet and the other holding up the king's lance, which had a broad steel head. At some point, the second page dozed off in the saddle and accidentally dropped the lance, which fell and struck the helmet of the page in front of him.

There was a loud clang, and Charles started in his saddle. As though spooked by the strange man in the forest and his warning, he spurred his horse forward, then drew his sword and wheeled around toward the two pages. His face was contorted; he seemed to recognize no one. Raising his sword over his head, he shouted wildly: "Attack! Attack the traitors!"

The young king was an excellent swordsman. The frightened pages reined their horses aside to escape his slashing blade, but a knight riding nearby was not so lucky; the king struck him dead in the saddle.

At this, fear and horror of the king fell over his entourage. "Everyone now fled from him as though from thunder and lightning."

Charles spied his brother nearby and suddenly made for him, brandishing his sword and yelling "Attack! Attack!"

Louis could hardly believe his eyes, for Charles had always shown him great afection. He spurred his horse and galloped off in a great fright . . .

The king's uncle, the Duke of Burgundy, then noticed the affair and rode over, crying out


"Disaster has overtaken us. The king's gone mad! After him, in God's name! Catch him!" And then, as if to urge Louis to safety: "Fly, nephew, fly! The king means to kill you!"

The courtiers eventually surrounded the king and let him beat him sword on their shields until he was worn out, whereupon they wrestled him to the ground and hurried him back to Le Mans. He fell into something like a coma and remained unmoving for two days.


But on the third day of his mysterious illness, to everyone's astonishment, Charles stirred and opened his eyes. Recognizing those around him, he spoke calmly and rationally. Then rising from his bed, he humbly begged pardon from all those he had harmed during his fit. After confessing his sins to a priest, he heard Mass and received the Eucharist. 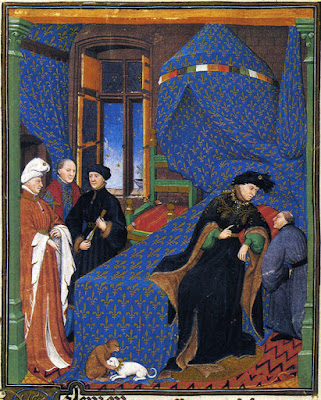 Part III: The King of Glass

Sadly the king's recovery did not last. A year later, after a nasty accident in which four men of his court were burned to death (the famous bal des ardents) he fell into madness again. Over the course of his reign he suffered 35 such episodes, lasting from days to months:


A strong, vigorous man, Charles loved to be outdoors and in the saddle, hunting or jousting. But during his spells he sat inside, keeping perfectly still for hours, claiming that he was made of glass and that any loud noise or sudden movement might shatter him into a thousand pieces. At other times he would shake and scream, shouting at invisible enemies and running so wildly through his palace that the doors had to be walled up to hide his antics his curious subjects and prevent him from escaping.

In his made fits, Charles hurled objects, smashed furniture, and struck courtiers and servants. There are reports that he even hit the queen. He also refused to change his clothes or bathe, wearing his royal finery to rags until his body grew so foul and his presence so odious that his servants had to overpower him, cut him out of his filthy, tattered garments, and forcibly wash him.

Yet each time he would one day wake up lucid and apologetic and go on in a somewhat normal way.

The quotations come from Eric Jager, Blood Royal: a True Tale of Crime and Detection in Medieval Paris, 2104. I am reading this right now and enjoying it very much, so expect a review soon. Jager's other book, The Duel, is one of my favorite popular books on the Middle Ages.
Posted by John at 1:25 PM