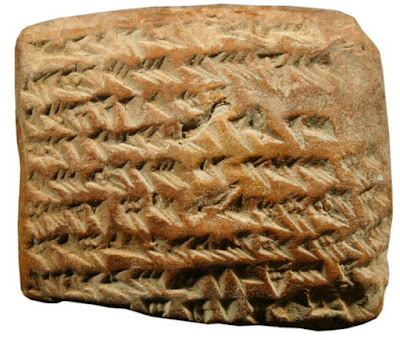 News today about higher math in ancient Babylon, used to calculate the future motions of the planet Jupiter:


What is perhaps more surprising is the sophistication with which they tracked the planet, judging from inscriptions on a small clay tablet dating to between 350 B.C. and 50 B.C. The tablet, a couple of inches wide and a couple of inches tall, reveals that the Babylonian astronomers employed a sort of precalculus in describing Jupiter’s motion across the night sky relative to the distant background stars. . . .

Mathematical calculations on four other tablets show that the Babylonians realized that the area under the curve on such a graph represented the distance traveled. 
Early Babylonian mathematicians who lived between 1800 B.C. and 1600 B.C. had figured out, for example, how to calculate the area of a trapezoid, and even how to divide a trapezoid into two smaller trapezoids of equal area. . . .

When Jupiter first appears in the night sky, it moves at a certain velocity relative to the background stars. Because Jupiter and Earth both constantly move in their orbits, to observers on Earth, Jupiter appears to slow down, and 120 days after it becomes visible, it comes to a standstill and reverses course.

In September, Dr. Ossendrijver went to the British Museum, where the tablets were taken in the late 19th century after being excavated. A close-up look of the new tablet confirmed it: The Babylonians were calculating the distance Jupiter traveled in the sky from its appearance to its position 60 days later. Using the technique of splitting a trapezoid into two smaller ones of equal area, they then figured out how long it took Jupiter to travel half that distance.

I confess that I don't really see the radical significance of this discovery, which after all might date to after Archimedes, who did much more sophisticated geometry than this. I am mainly fascinated that ancient humans put so much effort into mathematical astronomy. Most of the time, life as a hunter, barley farmer, or corporate drone doesn't make much use of the more impressive capabilities of our brains. So those who enjoy stretching their minds are always dreaming up yet more elaborately irrelevant mental exercises to do so: chess, go, sudoku, archaeology, blogging, n-dimensional topology.
Posted by John at 7:25 PM