Norman Rockwell and the Art World 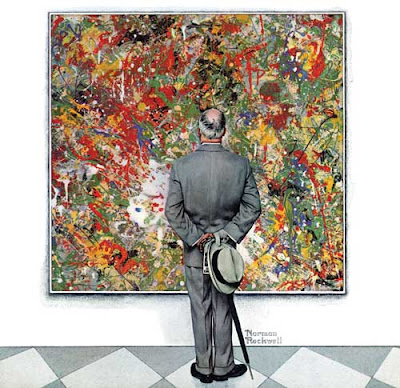 Norman Rockwell had a complicated relationship with the world of art:


One afternoon in July 1968 Rockwell picked up the phone in his studio and heard a voice at the other end talking intently about mounting a show of his work.

The man on the other end of the line was Bernie Danenberg, a young New York dealer. Later Danenberg tried to buy one of Rockwell's paintings for $2,500. Rockwell refused the money and tried to give the painting to Danenberg, saying he had already been paid for it by the Saturday Evening Post. 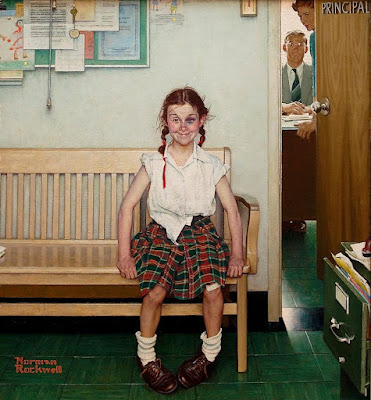 Rockwell had several such experiences in his life, apparently because of a deep ambivalence about his work. He certainly wasn't averse to making money off his art, since he did quite well selling covers for the Post, ads for Coca-Cola and other corporate titans, and magazine illustrations. He could be a brash self-promoter; he sold his first picture to the Post, then the top magazine in America, by barging into the editor's office with a portfolio. 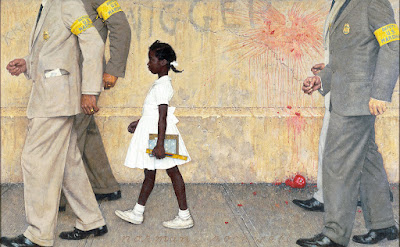 In the 1960s he eagerly took on controversial topics like racism. 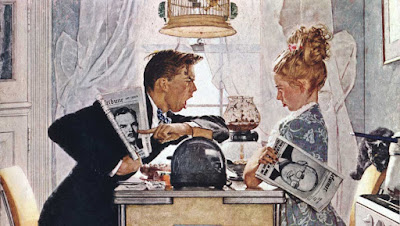 Most of Rockwell's fans probably despised "Modern Art", but he was never so sure that his creations measured up:


For all his success and dedication to popular, realistic art, Rockwell was also ambivalent about his style and his link to commerce. He was well versed in the history of art, and some of his illustrations borrow from great paintings: a 1920s advertisement for SunMaid raisins evokes Vermeer; the famous wartime Post cover of Rosie the Riveter borrows its pose from Michelangelo's Isaiah in the Sistine Chapel. At several junctures in his life, Rockwell traveled abroad, trying to get a handle on modern art and "paint for himself," as the phrase goes. But the effort invariably failed. "Every time they come out with a new art movement," he wrote, "I grimly try to follow it. However, when I put brush to canvas, alas, it always comes out Rockwell." When he was praised as an artist, he tended to assume that the speaker had confused him with the modern artist, Rockwell Kent. 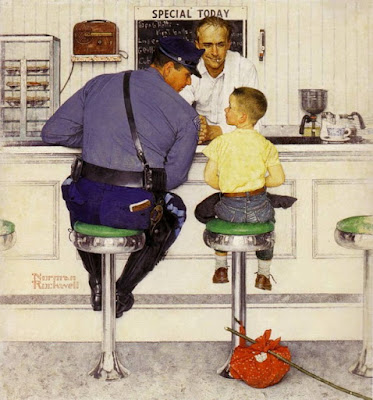 Rockwell simply lived at the wrong time to be taken seriously by the professional art world. These days he is in fashion like he never was while alive; he got his first major museum exhibit at the Guggenheim in 2002, and it was hugely popular. 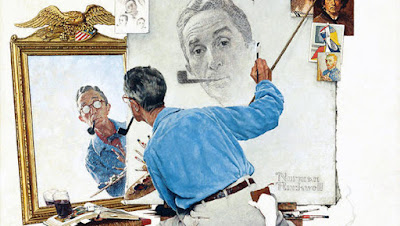 If I could have told him that, do you think he would have believed it? Did he secretly believe that he was a great artist scorned by a philistine age, or did he really think anyone asking about showing his paintings had the wrong Rockwell? I wonder.
Posted by John at 7:21 AM

Probably both, no? In the course of a long, self-conscious life, one can think many things.

I actually would posit neither. Rockwell simply seems like he was a humble, self effacing person.

I imagine he tended to paint what interested him, privately strove to improve his abilities, sold his work as he felt appropriate to make a living, and that was that. I can't imagine he thought of himself as some "great artist", and I also can't imagine his comments about people confusing him for other painters were meant to be taken seriously.

Most of his art was commercial, and he likely saw himself simply as a commercial artist. Compare with the prevailing attitude of entertainers of that time period - almost none of them considered themselves "great artists" in their fields, but rather simple Working Joes who were lucky enough to find success performing. Would you imagine, say, Groucho Marx ever truly considered himself a "great artist"? Would you actually take any self-effacing comment he made about himself seriously?

G., that's an interesting point. There have been and still are many artists who work in commercial realms and openly scoff at the art world and its pretensions. This includes numerous bluesmen and rock and roll stars, popular novelists like James Patterson, and many Hollywood figures. On the other hand there are many artists who feel a great ambivalence about this, and who sometimes express scorn for any of their work that ends up very popular. I don't know much about Rockwell, but both the reviewer whose work I cited and the biography she was reviewing made much of his ambivalence, so I would not dismiss the notion.

Well I find an aversion to fame and celebrity does occasionally crop up among successful artists.

Look at Bill Watterson, author of the wildly beloved comic strip Calvin and Hobbes. He just wanted to draw cartoons and make a decent living, and suddenly his strip was a smash hit practically overnight, and he rapidly grew to resent his fame.

It was especially unusual because he had signed away all his rights but didn't want his work merchandized. In a time when many artists were clamboring to sell out as hard as possible and get bigger and better sales deals of the likes of Snoopy or Garfield, Watterson had to fight tooth and nail for several years from a position of absolutely no actual legal power to get the rights back so he could NOT make a massive fortune.

Some people simply like creating, and they don't have any great aspirations to fame, and it annoys them when their works grow beyond simply being something to be enjoyed, and get twisted into something to be obsessed over in the name of celebrity. I honestly believe Rockwell was just such a person - happy to draw, untroubled by selling his work, but also perhaps a bit annoyed when he received attention he didn't think he deserved.