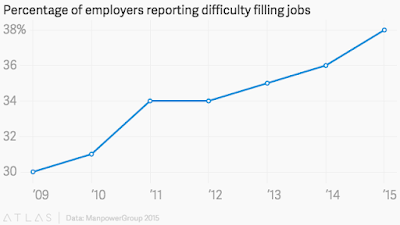 According to the Labor Department, there were about 5.4 million job openings in America through most of last year, the highest number in 15 years. Meanwhile, surveys of employers show that an increasing number say they are having trouble finding qualified applicants for their job openings (above).

There seems to be something of a mismatch between this number and other job market indicators; unemployment is low but that is partly because so many people have dropped out of the work force, and wages have barely crept up. With so many unfilled jobs, why aren't more people getting new positions or moving up?

This an area in which I have some personal experience. My employers have launched several searches for professional-level archaeologists and historians over the past few years and have usually ended up either hiring nobody or hiring somebody we were not entirely happy with. There are in America hundreds of under-employed archaeologists, people with the qualifications to hold these jobs who are currently working as field supervisors or the like. So why do we have trouble finding what we are looking for?

One reason is a sort of risk-aversion brought on by creeping stasis in the corporate world. The amount of effort our corporation requires from a manager who wants to make a new hire is quite burdensome; you have to write a detailed justification for the hire and show that you have enough billable work to keep this person busy for a year. New hires then have to be trained -- this applies even to very experienced people because our company has all these special systems for things like financial tracking that take months to master. And if you end up wanting to fire this person, that is even more burdensome.

Plus, Americans move and change jobs much less than they used to. We see that in our field; once somebody is hired for a professional-level job, he or she is likely to stay until retirement. This makes people very cautious about hiring somebody new; this isn't just a colleague for a year or two, this is somebody you may have to sit next to for 20 years.

So there are substantial barriers to making a hire that keep it from happening quickly even when the need is great.

The other factor is that in hiring a professional archaeologist we are looking for a particular combination of ability, experience and personality that seems to be rare. I am not sure how much this applies to other fields, but many people interested in archaeology or historic preservation are just not cut out for corporate life. In recent years we have had two or three people quit after a week, horrified by the structure they are expected to work in. Some have an academic orientation and can't get past the sad fact that while we hope to produce new knowledge about the past, that is pretty much an irrelevant side issue in a process devoted to checking bureaucratic boxes and getting our clients permission to build things. Others hate office life and long to be in the field every minute, or hate the mind-numbing bureaucracy involved in carrying any major project through to completion. And why would people who do have the skills and personality to thrive in the corporate world want to be archaeologists or historians when they could make so much more money doing something else?

I have quarreled with my bosses about a couple of people I wanted to hire, people with good academic credentials but no experience in corporate consulting. I tend to view the consulting stuff as something anyone can learn, as I did, so I think smart people just out of graduate school are worth the risk. But they have seen too many promising people run off howling into the night after their first taste of corporate life, and they are not interested in going through all the trouble of hiring someone who will likely never fit in and jump ship at the first opportunity.

Economists often argue that behind long-term unemployment is a "skills mismatch"; the applicants don't have the skills employers are looking for. My experience has been that people have the skills, but not the attitude. It takes a certain sort of person to show up every day to a corporate office and do the sometimes grinding work required to move projects forward, and millions of people don't want to do it. America is full of people who resist promotion because they hate the paperwork and responsibility of being a boss; I once worked briefly with a maintenance man who was bemoaning that he could only get hired as an apartment complex supervisor, and sure enough quit that job after just a month. I think this may be a particular problem for long-term unemployed people, who would be willing to work if there weren't so much corporate or government bullshit involved.
Posted by John at 7:24 AM