Life Light: the Next Frontier in Astronomy 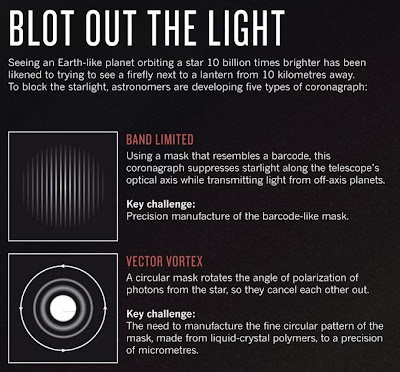 Most of the 859 and counting extra-solar planets so far discovered have been found by measuring tiny variations in the light of their stars. This is the simplest way to find planets, but it tells us little about them beyond their size and how close to the star they orbit.

To learn more about these planets, astronomers would like to separate out their reflected light from the rest of the light coming from the star. A hard trick, that, considering how dim a planet is compared to a star. But if they could do this, astronomers think, they might be able to analyze the light's spectrum and find the signatures of organic compounds that might indicate the presence of life. There are a lot of ifs here, but in principle it would work, and after all telescope technology is making great strides. The basic idea is to create an artificial eclipse by screening out the star's light. There are several competing methods of doing this, some of which are described in the graphic I lifted from Nature. 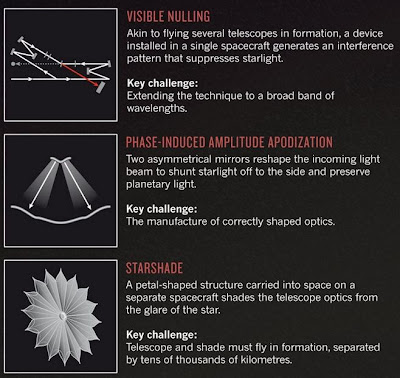 NASA actually had a plan for a space telescope designed to look for planetary light this way, but they had to shelve it because they didn't have the money. (I've got an idea of where to find some -- shoot down the International Space Station.) Now they are trying to adapt one of the 2.4-meter space telescopes given to them by the spy satellite folks in the National Reconnaissance Office for the job.

It is exciting to think that within another decade or two we might be able to read the chemical signatures of far-away planets and learn about their atmospheres and even, maybe, whether they might host carbon-based life. After all, 20 years ago extra-solar planets were only a theory.
Posted by John at 8:03 AM

One of my favorite categories of the classical hard SF genre was always the "exploring new planets" story.