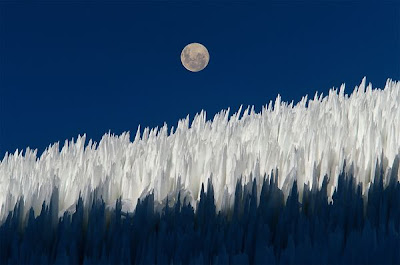 Penitent snow, or nieve penitente, is so called because the shapes were thought to resemble robed monks. National Geographic explains:

Nieve penitente tend to form in shallow valleys where the snow is deep and the sun doesn't shine at too steep an angle, said Kenneth Libbrecht, a physicist at the California Institute of Technology in Pasadena who studies ice crystal formation.

As the snow melts, dirt gets mixed in with the runoff and collects in little pools here and there, he said. Since the dirt is darker in color than the surrounding snow, the dirty areas melt faster "and you end up digging these pits," explained Libbrecht. 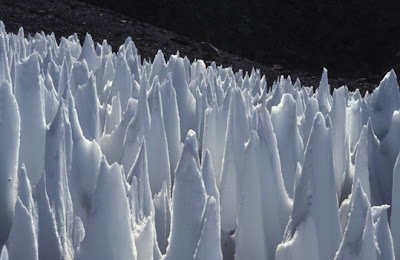 Charles Darwin encountered this phenomenon while exploring the Andes during the voyage of the Beagle, and he wrote this account:


Again we had a heavy & long climb similar to that up the Puquenes range. On each hand were bold conical hills of red Granite. We had to pass over still broader pieces of perpetual snow; this by the action of the thaw had assumed the form of numberless pinnacles, which as they were close together & high rendered it difficult for the Cargo Mules to pass. (Note in margin: Mem. Icebergs Arctic Regions.) A frozen horse was exposed, sticking to one of these points as to a pedestal, with its hind legs straight up in the air; the animal must have fallen into a hole head downmost & thus have died. 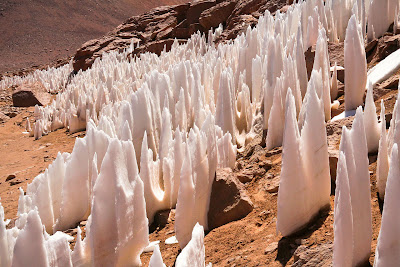