The Water Supply of Ancient Petra 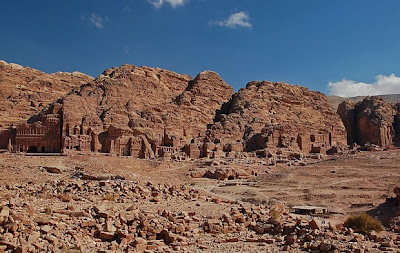 Ancient Petra today sits in a dry, desolate part of Jordan. Two thousand years ago, though, it was a thriving city surrounded by rich fields. Terraces were built on the hills that trapped water for crops, and streams were dammed to store water or direct it into underground channels:


Rainfall in the region occurs only between October and March, often in brief, torrential downpours, so it was important for Petra’s inhabitants to capture and store all available water for later use during the dry season. Over the centuries, the Nabataeans of Petra became experts at doing so. The broad watershed of sandstone hills naturally directed water flow to the city center, and a complex system of pipes and channels directed it to underground cisterns where it was stored for later use.

One of the authors of a new study of the water system says,


Perhaps most significantly, it’s clear that they had considerable knowledge of their surrounding topography and climate. The Nabataeans differentiated watersheds and the zones of use for water: water collected and stored in the city itself was not cannibalized for agricultural uses. The city’s administrators clearly distinguished water serving the city’s needs from water to be redirected and accumulated for nurturing crops. Thus, extensive farming activity was almost entirely outside the bounds of the city’s natural catchment area and utilized separate watersheds and systems of runoff.

I bring this up mainly as a corrective to the notion that the past was much simpler and less bureaucratic than the present. Many ancient civilizations depended on farming regimes that were minutely regulated by central authorities, and Petra seems to have been one of them.
Posted by John at 1:05 PM