Loch Cluhir and the Seed of Ivor

On a hill overlooking Loch Cluhir in southeastern Ireland is a ruin known as Castle Ivor about which many wonderful stories are told. Most authorities say it was built in the thirteenth century by Ivor O'Donovan, whose Norse personal name and Irish family show that he was the offspring of an alliance between Viking settlers and Gaelic nobility. The O'Donovan name can be traced back to Donnubán mac Cathail, a minor prince who died around 960, and whose name could be translated as "Dark Lord." Or "Lord with Dark Brown Hair," but, really, who would choose that version?

The O'Donovans claimed royal status, and their descendants in later times still made that claim; today they still rank themselves among the Irish nobility. The O'Donovans interbred with the family of Ivar of Limerick, founder of one of the most successful Scandinavian settlements in Ireland. Irish Annals credit this alliance with the Christianization of the Norse in Limerick, as one of Ivar's sons converted to marry an O'Donovan princess. As a result of this connection, one branch of the O'Donovan clan came to be known as the Seed of Ivor. In the sixteenth century this branch became the leading one within the O'Donovan clan in the person of Diarmaid an Bhairc, whose name, meaning "born at sea," is thought to be an acknowledgement of his Viking ancestry.

Loch Cluhir has as ancient association with the goddess Clíodhna or Cleena, and one of her many palaces is said to be under the lake. The O'Donovans sometimes claimed to be descendants of the goddess, and one of their most formidable 17th century lords was known as the "Dragon of Clíodhna." 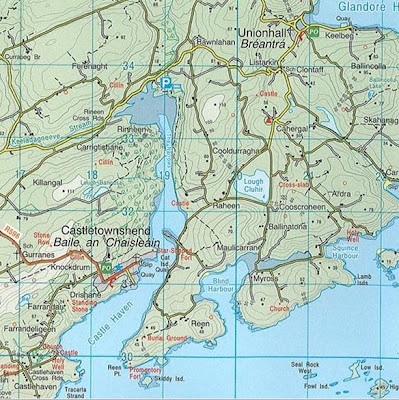 But most of the stories told about the lake have to do with Ivor O'Donovan. The poet John Collins of Myross once wrote:


Ivor was a celebrated trader, and is now regarded as a magician in the wild traditions of the peasantry of the district, who believe he is enchanted in a lake called Lough Cluhir, situated near Castle Ivor, in the townland of Listarkin, and that his magical ship is seen every seventh year, with all her courses set and colours flying, majestically floating on the surface of that lake. I have seen one person, in particular, testify by oath that he had seen this extraordinary phenomenon in the year 1778.

A storyteller visited by Edith Anna Somerville around 1900 told this tale:


There was an O'Donovan that was a Chieftain, of the Thirteenth Century. He was a great man for ships and for the sea, and for profit from the sea. He built a fleet o' ships, and he had a grand yacht for himself. He lived in the fort, north, Liss Blaw, the Fort of the Flowers, and it was him that built Castle Ire on the hill above. Well, when he died, himself and the yacht went under the lake – though there is some that say he is above always in Liss Blaw. But if any one of the family of O'Donovan was going to die, the Ship would be seen going around the lake.

Ivor O'Donovan also had famous hunting hounds, and the same storyteller said that he could be seen hunting around the bottom of the lake with them. Like many places in Ireland the lake's shores are also haunted by a black hound, and some versions make this hound out to be a member of Ivor's pack.

As if that weren't enough, the lake also once held a fearsome serpent. According to local legend, the serpent was finally slain by two brothers of the Burke family who were taken captive by the O'Donovans and offered to kill the serpent in exchange for their freedom. After making a spear of mountain ash and equipping it with a grapple to hold the serpent fast, the brothers did battle with the serpent:


The Serpent came jumping mad across the lake when she seen the Burke men on the place that was selected for the Battle. The youngest one o' them had the Spar held out to meet her. The Grapple cot her and was fast in her! The eldest one o' them then – "Burke Far-Shoung" (that means a man that would be cunning, a fighting man) – he jumped on her back, and it was hard for him, for it was all slimy and slippery. He gave her three strokes of the sword, and he on her back. . .

The headless serpent escaped and went thrashing around the lake, but its body was found on the lake shore the next day, and the Burke brothers won their freedom.

And this is just one tiny lake of the hundreds in Ireland, and one little ruined castle so obscure I can't even find a picture of it; shown at top is a later O'Donovan castle nearby, just to give you an idea of the local scenery. The density of folklore and history in Ireland boggles my mind.
Posted by John at 12:18 PM