What Sank the Hunley? Maybe their Own Bomb 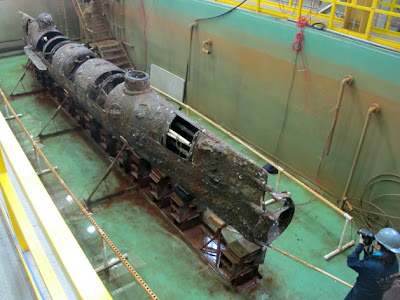 The Confederate submarine CSS Hunley, the first sub to sink a ship, was lost with all hands on the night of its famous attack. The crew were all found at their places, with no evidence that they had tried to abandon ship or any clear sign of what might have killed them.

Now there is a new theory. The Hunley carried its deadly mine on the end of a spar at the front of the vessel. The idea was that it was supposed to detach from the spar and attach to the vessel it was attacking, so that the sub could get away. But after cleaning the spar, the conservators think that the mine never came off:


Conservator Paul Mardikian had to remove material crusted onto one end of the spar after 150 years at the bottom of the ocean. Beneath the muck he found evidence of a cooper sleeve. The sleeve is in keeping with a diagram of the purported design of a Hunley torpedo that a Union general acquired after the war and is in the National Archives in Washington. "The sleeve is an indication the torpedo was attached to the end of the spar," Mardikian said. He said the rest of the 16-foot spar shows deformities in keeping with it being bent during an explosion.

Now it may be that the crew, found at their seats when the sub was raised with no evidence of an attempt to abandon ship, may have been knocked out by the concussion of an explosion so close by, said Lt. Gov. Glenn McConnell, a member of the South Carolina Hunley Commission.

So it looks like either the mine went off accidentally during the attack, or the captain, unable to detach the mine, set it off anyway, sacrificing himself and his men to sink the USS Housatonic. 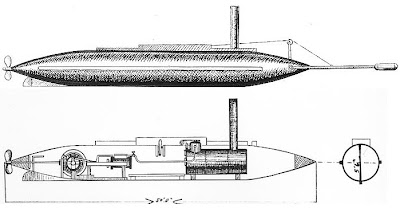 Drawing of the CSS David, a semi-submersible attack boat with a spar torpedo.
Posted by John at 7:19 AM