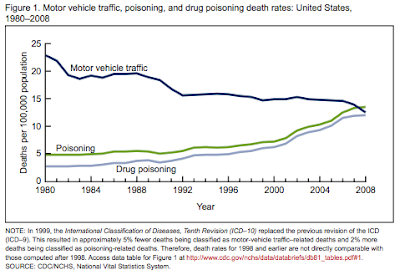 Poisoning is now the nation's leading cause of accidental death, overtaking car crashes. Ninety percent of those deaths are caused by drugs, and by far the most dangerous drugs are prescription opiates. Bloomberg:

To put the magnitude of the issue in perspective, the death wave from drug abuse is now as big, in terms of annual deaths, as the one caused by HIV-AIDS in the late 1980s.

While we fight cartels in Mexico and argue about marijuana, an epidemic of really dangerous drugs is raging under our noses.
Posted by John at 6:22 PM