Who is Defending Lyman, and Why? 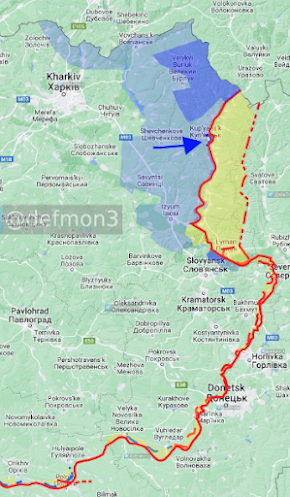 Above is a map of the front line in eastern Ukraine posted by a retired American officer who calls himself DefMon. The blue area is what Ukraine seized in their recent offensive. Yellow is the area currently contested. Near the southern end of that area is a town called Lyman. Ukraine has been attacking Lyman for a week, and it has been announced a couple of times that they have taken it, but as of right now it seems they still have not.
Now who, you may be wondering, is defending Lyman so stoutly? Russian paratroopers? The famous 1st Guards Tank Army? No, they all fled from the area, abandoning all their gear.
Lyman is mainly being defended by reservists from the so-called Luhansk Peoples Republic, one of the Russian puppet states in Donbas. Everyone is impressed by their determination; Russian sources call them heroes.
The question is, why? They are fighting for a state created in 2014, recognized by hardly anyone. They are constantly protesting against the miserable conditions they fight under; no pay for months, terrible food (when they get any food), drunken officers who never leave their bunkers and regularly issue them suicidal orders. The Russians give them the worst equipment; recently they have been using T-62 tanks made in the 1960s, and some of them carry World War II rifles. They are last in line for ammunition and everything else.
A story went around last week that one hospital in the LPR was releasing soldiers in their underwear. Their old uniforms were of course cut off them and burned when they came in, and the hospitals have no new clothes to give them.
One of their top leaders. Igor Girkin, is on Telegram every day saying they have been abandoned by the Russian leadership and the war is already effectively lost.
And yet there they are, repelling everything Ukraine can throw at them for day after day.
What is that about?
Is it that they have nothing left but courage? No country, no glory, no money, just grit?
Is it that they have noplace else to go?
Are they just so used to fighting by now that this is just who they are, and all they know to do?
Posted by John at 3:22 PM

Maybe if any of them survive, we can ask them.

That said, Occam's Razor suggests the simplest answer is likely to be right - this is simply the hill they have chosen to die on.