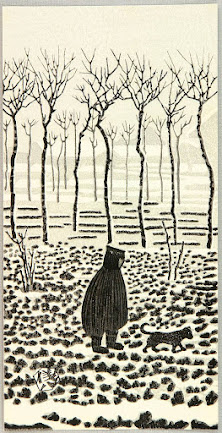 Photographs of "spirit bears." The kermode bear is a subspecies of the North Americal black bear, and the population of kermode bears in British Columbia has a recessive gene that leads to about 20 percent of them being white.

The US Fish & Wildllife Servie is air dropping millions of doses of oral rabies vaccine wrapped in fish meal – they look like ravioli – across the Appalachian region from Alabama to Maine to reduce the amount of rabies in raccoons and other small predators.

Collection of old news articles illustrating some of the many social changes that were blamed on jazz. Serious question: does any kind of music – jazz, rock, punk, opera – have cognitive effects in itself? Plato and Confucius thought so. Or it is that in the 20th century any kind of music might have become associated with rebellious youth culture?

Did Christianity revolutionize ethics? The review at the link argues that it did. I say, maybe in theory, but in practice Europe continued to despise the weak and downtrodden for a long time. Donald Trump still despises them, and he was elected President by Christians.

NY Times review of a book about why culture seems to be stagnating: when there was a cultural center that everyone recognized, people fought for status within it by innovating. Now that there is no cultural center to fight over, people can only squabble over popularity and money. "It makes more sense for a parvenu to fake a ride on a private jet than to fake an interest in contemporary art." The sad conclusion would be that people only get excited about stuff that lots of others are excited about.

US life expectancy fell again in 2021, so we're back to the level of 2003 now. This was mostly because of the pandemic, but "deaths of despair" (overdose, liver disease, suicide) also remain high.

Tweetstorm providing a succinct summary of the saga of government documents at Mar-a-Lago.

The trapeze disrobing act of circus strongwoman Miss Charmion, filmed in 1901 by Thomas Edison. Film clip here, article here, with much better pictures of  Miss Charmion. She was buff.

The manufacture of amphetamines has long been a specialty of the Islamic state, originally for the use of their own soldiers. Their product is called "captagon," but most of it is just generic methamphetamine. Now they have turned this into an export business; the Saudis and the Turks have both recently reported seizing loads of Captagon pills from Syria worth hundreds of millions of dollars.

Trying to catalog all the miseries of life at the TSA.

There is a claim that another ancient language has been deciphered: Linear Elamite. But not everyone accepts the claim.

Tinder is 10 years old. Instead of a happy story about all the loving relationships that began online, the NY Times chose to mark this anniversary by runnig a really depressing screed about people burned out from years of fruitless attempts to find a soul mate.

So Gorbachev is dead. I never knew what to make of him, but I was very interested in a book I read arguing that he and his allies moved to reform the Soviet state because they could no longer stand the sheer scale of the lying. The original purpose of glasnost, in this view was just to make it possible for decision makers to get accurate information. It is indeed hard to rule when nobody tells you the truth.

How Russia and Ukraine have adapted to a changing battlefield.

LPR volunteer "Murz" reviews the discouraging state of the war six months in.

Ukraine is increasingly using electronic warfare against Russian drones. And here is an account from the Wagner fightner known as Grey Zone.

NAFO, the ubiquitous shiba inu dog, and the meme war over Ukraine. People really feared that Russian online trolling and so on would have a significant impact on Ukrainian morale and opinions in Europe, but the opposite has happened. Turns out fighting for freedom against evil tyranny is popular.

Eighteen men from one Russian Spetsnaz unit were killed in a single missile attack on July 19, including their commender, a Major.

Did Christianity revolutionize ethics? I've been thinking about this question a lot. One could spend several lifetimes trying to answer it, especially if one wants to go beyond the polemical, more-heat-than-light shedding no (in the sense, of "No, people who say they're Christian still fight wars and despise the poor"). The Gospels simply don't, in large part and in themselves, provide a viable recipe for an ongoing society--indeed, to want to have an ongoing society would probably miss the point. The Sermon on the Mount, for example, would only work in a lush environment where one could always pick enough to eat (the Lord provides and working, as opposed to gathering, shows lack of faith), the weather was always balmy (clothing discouraged), and there was no season of dearth (storing goods also shows lack of faith). The Gospels praise Mary of Bethany, who loves the Lord with no thought of the morrow; but in real life, most of us are her lesser sister Martha, "busy about many things."

In sum, one who tries to answer this by looking for fulfillment of the highest Gospel values has arguably already answered the question.

But if one wants to, as John once said, "live in the question"--a worthy goal, IMO--and is willing to look for something a little more indirect, I think the answer might arguably be yes. For example: consider that, at some point, most Christian societies or groups enter a situation where large numbers of people spend a large amount of time obsessing about the afterlife and what will be their fate in it. In medieval Europe it's clear this was done on a massive scale, and with the most literal sort of thinking. Huge effort, time, habit, money, and controversy revolved around this. That seems to me to be done in a way, on a scale, and with an officially-legitimated literalness that one simply doesn't see in the classical pagan world. Of course, medieval Europeans shared much of this obsession with other Old World societies (Islamic, Hindu, Buddhist, at least), mutatis mutandis. But I'm skeptical that this provides important grounds for deprecating the specific role of Christianity in promoting otherworld obsessions in Europe.

Consider also that Christianity brought with it the Old Testament. The scripture of a consciously small people determined to remain themselves (and to sacralize their own small self-determination with the One Creator God's blessing) suddenly became the property of huge numbers of folks from many other peoples. I think this must contribute to and in some ways define the rise of modern nationalism. You wouldn't have the balkanized Balkans, or, say, Irish or Catalan nationalism, without it. The Old Testament didn't create ethnic sectarianism; but it gave that sectarianism a shape, durability, and intellectual respectability it would not otherwise have, I think. These nationalisms all aspire, on some level, to create each their own little people of Israel; they owe much more to the Old Testament than they do, IMO, to the Greek polis.

I also consider the question of Christianity's impact open. It's true that many people seem not to take it seriously most of the time, but I am impressed that you keep seeing people and movements popping up who take it very seriously: the early Franciscans, the Puritans, etc. You also regularly see people who fixate on one teaching and for example won't swear oaths. I suspect that the continued existence of the Christian narrative running counter to the dominant one of worldly success has been psychologically huge and non-negligible in economic and sociological terms.

And then there's the enormous debt our society owes the medieval Church for the whole bureaucratic-rational way we do things (systems of separate but coordinate institutions, rules, archives, offices notionally held on merit, discrete buildings and rooms for doing separate things, self-denial as part of merit, formalized committees, inspection and enforcement from higher-ups, etc.). Other societies also created some or all of these things, and even did so very well, but the western system of this descends from the Church, and this western system has arguably conquered the world (much more than democracy has, like it or not, for better or worse).

Yes, Christianity has definitely shaped the western tradition of dissent. Christian societies have upper classes, commercial systems, etc., etc.--but St. Francis is not just some little blip, as you suggest.

So, on the one hand, I think you can see lots of more or less indirect or subtle effects such as those I've mentioned, which reflect the constant presence of a non-heroic but massive Christianization--and at the same time, you have a very powerful tradition of dissent which wants to take the Gospels very seriously, and tries to call listeners to this very dedicated, total life. Again, one finds similar things in other religions, but this is the specific form it takes among Christians (including beyond what one usually considers the West--consider the Canudos movement, the global spread of Pentacostalism, or possibly Taiping, whose asexual egalitarianism seems to me to have a real Christian aspect), which is no small thing.

I mean: as you suggest, St. Francis was not some little blip. Not that you suggested he was a blip.

Could we start a Christian reform movement to allow editing of comments on blogger?

I think I've read one POlish historian who in passing amde similar claim, but for the sake of my life I can't remember who that was and in what context he wrote that. I think he wrote that for the (northern) barbarian pagans it was obvious, that not everyone would go to the same place and the iea that at least in afterlife everyone was equal, and that noble richman here might not be elevated above the common folk in afterlife was revolutionary. There was more to that, but I've read that long ago.

I wonder if our divisive non-reticence about our contrary opinions springs from this tradition? We all think we're Jesus in the Temple.

Should one say that, particularly of pre-modern societies, that most people don't take Christianity seriously most of the time? Perhaps the question you're asking is not, did Christianity revolutionize ethics, but honestly, something much more specific: Did Christianity make people social egalitarians?

Most of the changes I've mentioned I would say were important. What could be more important than nationalism and bureaucracy, writ large? None of them meant egalitarianism. I'm not even sure Francis was a real social egalitarian. Was Franciscan poverty about identifying with the poor as a social class, or about taking literally and heroically the gospel call to the Rich Young Man to "sell everything, take up your cross, and follow me"?