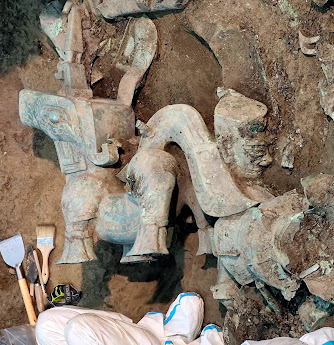 Accusations of "indoctrination" in America public schools go back to the 1840s, when there were ugly battles over whether "non-denominational" religious instruction was really anti-Catholic.

Psychedelics have some promise in the treatment of depression and other mental health problems but some worry they are being dangerously over-hyped.

Photographs of interesting human figures made from trash illegally imported into the Democratic Republic of the Congo, half art, half protest.

The "Toledo War" over the boundary between Ohio and Michigan.

Wonderfully detailed picture map of the road to Kyoto, 1690.

A visti to the Cimetière des Chiens et Autres Animaux Domestique in Paris, one of the world's oldest pet cemeteries.

And a Twitter discussion of the new labels on the art works at the Burrell Collection in Glasgow, glossed by one writer as "the worst I have ever seen." What happens when the desire to be accessible crosses with wokeism.

Nearly a quarter of Hong Kong's young workers have emigrated in the past year.

Good explainer on the water crisis in Jackson, Mississippi: the underlying problem is disinvestment, driven by the falling population, severe city budget crisis, and lack of interest by the state legislature in helping a majority black city. Interesting to note that when a city's population falls, all of the old water infrastructure remains in place – even the parts no longer serving anyone – becoming an ever-greater maintenance burden.

Americans are unhappy with the economy, but our GDP is doing much better than that of the big European economies, and our inflation is lower. And that's without even factoring in Europe's war-related energy price spike. (Kevin Drum)

An argument that cell phones reduced violent crime by making it less important for drug dealers to control territory.

Via the Silicon Tribesman, photographs of the array of Roman shoes found at Vindolanda. And more of the same.

South Korean government proposes providing parents of newborn children a subsidy of about $740/month in a desperate attempt to raise their birth rate, one of the world's lowest.

Black flight: hundreds of thousands of African Americans have moved to the suburbs, and blacks are now not much more likely than whites to live in big cities. Some people blame "gentrification" but what's really going on is that all the races are becoming more alike in terms of where people want and can afford to live.

In response to the energy crisis created by the Ukraine war, European governments are abandoning orthodox economics and ramping up their spending amidst high inflation. Some are also enacting price limits, profit taxes, and the nationalization of key firms. “Government intervention is back in vogue in a really big way,” says one consultant. People like or tolerate capitalism when things are good, but quickly move away from it in a crisis. (NY Times)
Interesting that event planners in Britain have for years been taking out insurance in case their events had to be cancelled due to the queen's death.
In the NY Times, David Brooks takes on one of the worst trends in American business, the open-plan workplace:

For decades, research has found that open plan offices are bad for companies, bad for workers, bad for health and bad for morale. And yet they just won’t die. Human beings, if they are to thrive, need a bit of privacy — walls and a door. And yet employers, decade after decade, neglect to give workers what they need, refuse to do what’s in their own self-interest.

Americans are unhappy with the economy, but our GDP is doing much better than that of the big European economies, and our inflation is lower. And that's without even factoring in Europe's war-related energy price spike.

...but you're wholly failing to account for the fact that our income inequality is far, far greater.

The top 1% in America have almost twice the share of income as their counterparts in Europe - 20% vs 12%.

Meanwhile, the bottom 50% in America have roughly half the share of income as their counterparts in Europe - 13% vs 22%.

Our GDP is virtually always going to be higher than nearly all European countries purely by default, because it's gross domestic product, and we're just so much more populous than our European counterparts.

But even if you accounted for this inherent imbalance somehow, even having a higher "adjusted" GDP wouldn't actually translate into the average person better off, because the share of that wealth for the bottom 50% is just so staggeringly less.

The same wrinkle also applies to inflation - with our bottom 50% having half the wealth share as comparable Europeans, that means that the impact of inflation for the bottom 50% is actually about twice as bad for Americans. Given that European inflation rates are only slightly higher than US ones (not 100% higher), this means that poor and middle class Americans are suffering far more from inflation, despite technically facing a lower absolute inflation rate.

Consequently, Americans have every right to be unhappy with the economy, as their European counterparts are doing far better than they are, despite smaller GDPs and slightly higher inflation rates.