Mass grave of at least 35 people, likely victims of violence, found at Neolithic site in Slovakia.

A documentary about a terrorist rehabilitation center in Saudi Arabia gets initial praise but then makes Arab filmmakers mad; from this NY Times article it seems like they are mainly cranky that Americans still want to talk about terrorism all the time.

Kevin Drum asks an important question: everyone knows the "referendums" Russia is holding in occupied Ukraine are fake and the outcome predetermined, so why do they bother? Why do dictatorships do this sort of thing? Is it a sort of legal formalism? Or is essentially for the regime's own internal scorekeeping?

This Alabama state legislator voted for a law requiring a photo ID to vote in elections, but now most of his family won't vote because they think photo IDs are "the mark of the beast."

According to this study, which I can't read, rising death rates among white Americans over the past 20 years are heavily concentrated among the least educated.

Some interesting research on Crannogs, artificial islands built from the Neolithic to the 16th century in Scotland, Wales, and Ireland. More here.

Genetic analysis confirms that the 17 bodies dumped in a well in Medieval Norwich were Jews, likely victims of a massacre, possibly a known one related to Crusading.

The history of sunflowers: the large flower heads we are used to seeing now are the product of millennia of breeding for more of the oily seeds.

Anxiety over the push button, which at one time symbolized the replacement of humans by machines.

Thread on the ammunition orders the Pentagon reported in August, presumably to replace stuff that had been sent to Ukraine. Includes about 1080 GMLRS rockets for HIMARS. It also includes nearly half a billion to increase production of 155 mm artillery shells, including new factories. Another signal that the US is in this war for the duration.

Excellent feature at The Economist on Ukraine's September offensive, following the route to Kupyansk kilometer by kilometer.

Someone tried to hold a rally against Ukrainian immigration to Poland, but nobody showed up.

Global opinion is turning more and more against Russia, as leaders from nations that often support Russia denounce the war at the UN and other venues.

Pro-Ukraine folks love these HIMARS launch videos. And another.

Western intelligence agencies estimated that the Russian force arrayed to attack Ukraine in February contained 1200 tanks; Russia is now visually confirmed to have lost 1211 tanks, so the entire attacking tank force has been wiped out.

The captured Russian bridgelayer that played a role in Ukraine's early September offensive. 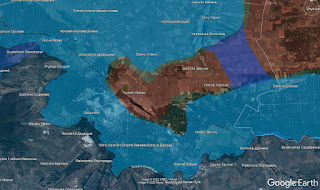 As of 7:00 AM EDT Friday, unconfirmed reports (here, here, here) say that Russian forces in Lyman are surrounded: since Russia lacks the forces for a major counter-attack to rescue them, the town will certainly fall soon, with many hundreds of prisoners. The only estimate I have seen says there are 2,000-3,500 Russian troops there. Another major victory for Ukraine – "worse for the Russians than Balakliya, Kupyansk and Izyum together" – but the real question will be whether this generates any momentum for further advance. Yesterday people said Russia was trying to form a new line along the Zherebets River, anchored at Zarichne, but now reports say Ukrainian forces have already crossed the river and flanked the town.
Posted by John at 7:13 AM

Re the twitter thread on anti-immigration rally, organized by Konfederacja Korony Polskiej (which is part of Konfederacja, https://en.wikipedia.org/wiki/Confederation_Liberty_and_Independence). Many commenters say Konfederacja is "pro-Russian party". This is not true. Konfederacja is actually a bunch of rightwing parties which are bound together because only together they can pass 5% threshold to get into parliament. There are nationalist and libertarian factions, there are factions which are arguably pro-Russian and anti-Ukrainian, but there are also factions which are pro-Ukrainian, but also propose cold-hearted measures. The problem is that from my point of view they are the only party which is both anti-socialist and anti-UE, but in addition to reasonable politicians it contains _a lot_ of nuts (e.g. antivaxxers). Including two arch-nuts, JKM and Braun. The first one is known for saying some wildly controversial and unpopular things whenever his party would start to gain popularity. The second one is simply crazy.

All in all Ukrainians have the great press now in Poland. 94% of Poles in March 2022 and 94% in June 2022 answered "absolutely yes" or "yes" to the question of "should Poland accept refugees from Ukraine" (source: CBOS https://www.cbos.pl/SPISKOM.POL/2022/K_101_22.PDF). Just before the war onlu 41% of Poles declared sympathy to Ukrainians, and 25% antipathy (less liked than Germans!). This war changed a lot.


(Konfederacja here alludes to an old Polish word for, amongst other things, organization created by discontent nobles - basically a legal riot against government https://en.wikipedia.org/wiki/Confederation_(Poland%E2%80%93Lithuania))

Kevin Drum asks an important question: everyone knows the "referendums" Russia is holding in occupied Ukraine are fake and the outcome predetermined, so why do they bother? Why do dictatorships do this sort of thing? Is it a sort of legal formalism? Or is essentially for the regime's own internal scorekeeping?

Many Russians actually believe the referendums are 100% legitimate and real. Just like they believe Ukraine is run by Nazis, and that Russia is actually NOT an aggressor and somehow didn't start the war, and all the other bonkers absurd claims put out by the Kremlin. In exactly the same way that many Americans actually believe Trump's insane claims.

It's Hitler's "große Lüge" / "Big Lie" (originally used as a slander against Jews, claiming the technique was theirs, and employed against the Germans to defame them for WWI). It's textbook Fascist populism. Hitler outright insisted that Germany didn't actually lose WWI, but rather was undermined by traitors within, which "everyone" knew was absurd - except for the millions of Germans for whom (in Hitler's own words) it seemed that no one "could have the impudence to distort the truth so infamously".

Putin and his regime, for all his insistence on being an eternal foe of "Nazism", operate in a blatantly Fascist manner.

This Alabama state legislator voted for a law requiring a photo ID to vote in elections, but now most of his family won't vote because they think photo IDs are "the mark of the beast."

Do they also refuse to drive, given you need a license to do so on public roads? I'm assuming not, given this is a bunch of zealous Alabamans who I imagine can't even spell "hypocrisy", but it's possible to surprise.

No doubt like the "good Christians" they so clearly are, they also insist that homosexuals are an "abomination" - in between eating fistfuls of fried shrimp, while wearing mixed fabrics, with the men wearing shaved beards, with the women wearing "men's clothing", with both sexes sporting tattoos, while failing to recite the central prayers twice daily and study the Torah, and all the other Deuteronomic rules and prohibitions they blatantly, selectively ignore, because their faith is one of convenience which they only observe when it's dictates match their whims and prejudices.

Someone tried to hold a rally against Ukrainian immigration to Poland, but nobody showed up.

My fellow Poles! We must not allow the Ukrainians into our beloved country! They may be our fellow slavs, and they may likewise also be the historic victims of Russian brutality for all the same reasons we Poles were, and it may well be that if we don't support Ukraine today it will Poland the Russians invade tomorrow, and the world may be applauding us for the charity and fellowships we are showing to them in their time of need... but... umm... hang on... I forgot where I was going with this...

...and all the other Deuteronomic rules and prohibitions they blatantly, selectively ignore...

Ahh, not-fully-awake-yet slip up. Christian homophobia is largely "justified" by Leviticus, not Deuteronomy. Still, that's just another layer of hypocrisy - even if you followed every Levitican commandment (which they don't), if you then turned around and ignored the Deuteronomic ones, well, that's still cherry-picking your faith for your own convenience.

I don't think the importance of the phony referenda is too difficult to understand. It's very much along the same lines as the bully who makes sure to goad their victim into striking the first (ineffective) blow. Nobody is fooled, but it gives the bully a sort of cover (which can also be used by anyone inclined to take the bully's side if they can be given an excuse to do so, including authority figures).

In Putin's case, the fact that westerners will dismiss his referenda as a sham is probably part of the point: "Once again effeminate, self-satisfied westerners are questioning us with their decadent 'rationalism.' How they hate Russia, the last bastion of manhood!" This sort of self-identifying as a victim is absolutely essential to an effective tough-guy politics; Trump and MAGA do much of the same.

Nothing of what I'm saying is particularly mysterious or revelatory--which makes me wonder why Drum would ask a question like that in the first place.