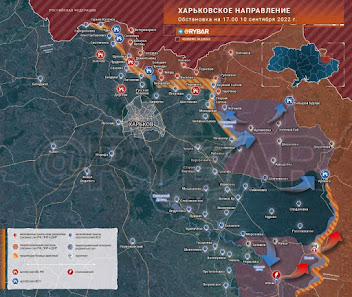 I woke up this morning afraid to check the news from Ukraine, in case the amazing good tidings of the past two days were a mirage. But no; the advance continues. Izium, which Russia took in March after weeks of hard fighting, and even then only after a collaborationist local official handed them a plan of Ukrainian positions and suggested a way around them, was retaken with hardly a shot fired. Seeing that the whole front was collapsing around them, the Russians simply left as fast as they could.

Which was probably the right decision for them, but having to secure another city would at least have slowed Ukrainian forces a little. Instead they are simply plunging onward into the vaccum left by fleeing Russians.

Now the word is that the Russians have also abandoned Lyman, another town they fought hard to take. And still there is no sign of any force forming to stop the Ukrainian advance. There are traffic jams at the Russian border as civilians who collaborated with Russia try to cross.

The only good news for Russia is that most of their troops seem to have escaped, so far, by running faster than their pursuers. But not all; Ukraine reports "thousands" of prisoners, and we have pictures of two captured Lt. Colonels (battalion commanders). Probably hundreds more Russians are just wandering around now in areas bypassed by the fighting, and will be rounded up in coming days.

Photographs of abandoned and destroyed Russian gear are flooding the internet. And this includes high value items like radars, electronic warfare stations, surface-to-air missile launchers, and self-propelled artillery pieces. Dozens of abandoned supply dumps have also been photographed, including large ones in Balakliya and Kupyansk.

I should note that some western observers have been expecting this. They noted a couple of things: first, reports about the shortage of soldiers for the Russians, the forced recruitment of untrained old men into LPR and DNR units, etc., which, taken together with the ongoing Russian offensive in some areas, meant that they could not have enough good troops to defend their whole line; and, second, rumors of new forces being built by Ukraine, along with the fact that some weapons known to have been donated by the west had not been seen in combat, which meant Ukraine was assembling a reserve somewhere, for something. The betting was that this would be used for a major counter attack, although nobody knew where.

Russia simply tried to hold too much territory with too small a force, especially given that they had significant forces concentrated at the locations in Donbas where they were still attacking. The line was bound to crack sometime.

People are noticing that things are hardly going as Putin predicted. Already we have seen rumblings of dissent in Russia, with calls by local officials for Putin to be arrested. This collapse won't help. Here's a good observation:

To foresee literally none of the consequences of the invasion has to be called quite an achievement by Putin.

And I think this is fair:

Given the situation for his forces, Putin's silence over the past days looks rather pathetic. At least, say something to your people.

Zelensky spoke to his people every single day even on the darkest of days. This is leadership, and this is why what is happening is indeed happening.

I'm very pleased and relieved that, to judge from the map you've attached, the Ukrainians seem to be widening their salient rather than merely going forward at the Schwerpunkt. Both Ukrainian intelligence (for keeping the plans so well hidden) and generalship seem to be doing quite well.

Excellent news indeed. I was frantically refreshing all the sources I could find all the day, and in the beginning there was still a lot of coping on the Russian side -just few hours before one pro-RUssian blogger was saying Izyum won't fall. Right now it seems that this is the biggest defeat Russia has faced during last few months. I love seeing our T72 put to good use by Ukrainians :D

Today the Ukrainian forces turned north, and it looks like they will retake all of Kharkiv Oblast west of the Oskil River. But that means they did not keep driving east, and Russian Telegram accounts are saying that a new defensive line is forming along the Oskil. Lyman did not fall. I don't know if this was a smart move; I thought Ukraine should have kept going while the going was good. I hope they "bounced" the river line (=seized bridgeheads) while they had the chance.

There have been many battles where one side had the decisive advantage but lost it by stopping. (This includes one of those I have studied intensely, Antiteam.)

Russian losses in equipment have been large; already as of yesterday afternoon they totalled around seven Battallion Tactical Groups worth of tanks, APCs, and artillery, plus a very large amount of ammunition. And more pictures are still coming in.

There are gossips that Ukraine is preparing another offensive in the south, towards Mariupol. Could be a feint though to prevent RUssians to move their reserves into other fronts.

So proud of the Ukrainian OPSEC!