Keeping the Dead from Walking 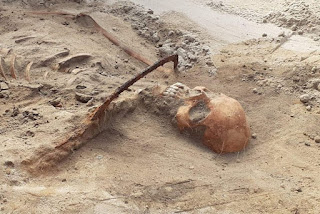 In Poland, archaeologists have announced the latest in a long series of European "vampire burials," in which measures seem to have been taken to keep the corpse from rising from the grave and causing trouble. The burial dates to the 1600s. The belief that corpses could rise and do harm is very widespread, but it does seem that early modern Europeans had a particular fear of it; to take one example I happen to know about, ancient Babylonians and Assyrians were a lot more worried about ghosts from bodies that had never been buried at all, which they thought roamed in the desert wilderness. As a guess, the European fear of walking corpses has something to do with the Black Death, since the association of vampires with contagious disease is strong in folklore. 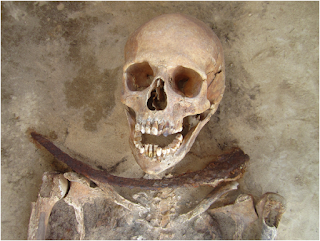 This Polish example is a "sickle burial," buried with a sickle across its neck. This does not, so far as I know, appear anywhere in folklore, so it is just a guess that the sickle was intended to keep the body from rising. Some archaeologists have expressed doubts. But what else would it mean? Above is another example, excavated in Poland in 2012. 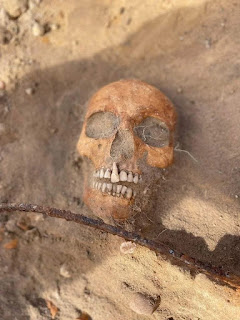 The most recent example was a mature woman with a strangely placed front tooth (above), which might have inspired rumors about her. She was probably not poor, since she was buried in a silk cap. Besides the sickle, she had a padlock on her toe, which certainly looks like another means of keeping her from walking. 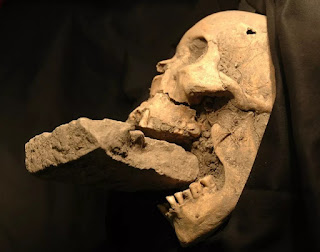 The sickles are only one suspected vampire-thwarting technique. Another method documented in Italy and Poland, was to wedge a brick or stone into the corpse's mouth. In Italy this goes back at least to the 6th century AD. The example above, dating to the 1400s, is known as The Vampire of Venice.

One method that is well documented in folklore, and also in travelers' accounts from the 1700s, is to separate the body from the head. And archaeologists have found several of these, for example a group of graves in Poland that were buried with their heads between their legs. On the other hand this was also sometimes done to criminals, either as a means of execution or after death, so not every headless corpse will be a suspected vampire.

As you might imagine from modern lore, some bodies had stakes or iron rods driven through their chests to hold them down. In older folklore this is always done to corpses lying in the grave; so far as I know its use on walking vampires is a modern notion.

This area of research may actually have been helped by sensationalizing news stories about these burials. It's certainly the only reason I know about them, and I suspect that Polish and Italian archaeologists might not even know that these techniques were used in both countries if the media had not spread these accounts so widely. I did a lot of research on this sort of thing in the 1990s and at that time there were very few examples in the accessible literature, none of them as clear-cut as these.

Note that in Polish folklore the stake must be from aspen. No idea why. As for the graves, burying with face down (so the dead would dig deeper instead of going up) was another method. You could also throw iron nails into coffin.

This Polish example is a "sickle burial," buried with a sickle across its neck. This does not, so far as I know, appear anywhere in folklore, so it is just a guess that the sickle was intended to keep the body from rising. Some archaeologists have expressed doubts. But what else would it mean?

Sickles are symbols of reaping, and by extension Death - the same as scythes. I could see this in turn being something connected to burials of people who worked in professions related to death - morticians, grave diggers, executioners, etc.

There's also the aspect that in many cultures, such individuals are considered tainted by their work and subsequently viewed with suspicion or relegated to a lower social status. If the scythe is, in fact, meant as some sort of deterrent against the dead rising, it might be less to do with "vampires" per se, and more to do with possession by malignant spirits which might be believed to surrounded people working professions related to death.

I also could envision an entirely different angle, where the sickle is there for reasons more immediately tied to agriculture. Suppose an isolated community of farmers rose up against a particularly hated local landowner or exploitative burgher, and put them to death - they might not be willing to leave the body unburied, but still be willing to display a certain level of disrespect and mockery toward the hated dead by laying a (rather symbolic) scythe across the neck (or perhaps even IN the neck - with no remaining flesh, I assume we can't be certain these scythes weren't used to cut the throats of the deceased). This could well explain the burial with the silk cap; and perhaps even the padlock, which might have come from the warehouse of a wealthy merchant or from the shackles used by a cruel landowner on their serfs.

Or perhaps it's not a threatening gesture at all - perhaps it's simply macabre? Someone "cut down" before their time might be buried with a scythe at their neck as a sort of reflection of the fickleness of Death Perhaps as a sort of 'memento mori'? Or perhaps these are individuals whose deaths were somehow caused by (or related to) the harvest? I can't say I'm drawn to any particular explanation, but there appear to be somewhat plausible options to consider.

I do also find myself wondering about the actual cost of such a gesture. How cheap were scythes at the time? Would this be a gesture virtually anyone could afford to make, even the very poorest, or might this be somewhat costly and therefor indicate a greater degree of gravity? Obviously a scythe isn't a luxury good, so it's far from the equivalent of burying someone with a sword, but still...

Bah, I just noticed I had a mental slip and started referring to sickles as "scythes". Dang ol' brain, tripping itself up.