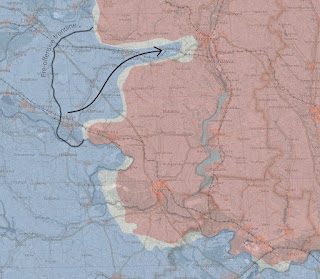 Major news from Ukraine! In the north, east of Kharkiv, Ukrainian forces broke through Russian lines and advanced nearly 40 km over the past two days. They have taken hundreds of prisoners and captured dozens of vehicles and artillery pieces. On Friday morning they reached the outskirts of the railroad junction of Kupyansk, which is a key supply node for Russian forces in the north. And they may keep going, since there doesn't seem to be anything to stop them.

The story seems to be that in order to defend Kherson in the south and maintain its own offensive in the east, Russia stripped much of its line of army troops. Defense was left to barely trained reservists from the LPR and DNR, Russian police forces, and so on. Front line men were dug in, but there were few tactical reserves behind them.

On Tueesday morning Ukraine launched an assault at a point in the line just north of Balakliya. According to Russian bloggers, this was led by an "powerful armored fist" of 15 tanks. (Which is not really a lot of tanks; on this front in WW II an "armored fist" would have been at least 40 tanks, and both sides have hundreds of tanks in action.) The front line was overwhelmed, and with no reserves the Ukrainians simply poured through the gap and drove on through one town after another. Again according to Russian sources, the main defenders of Balakliya were Rosgvardia (police) troops whose only heavy weapons were two mortars they did not know how to fire, and who did not know how to reach artillery support on the radios they had been issued. Unsurprisingly, they surrendered or ran. According to Igor Girkin, the attack was aided by Ukrainian special forces roaming in Russian rear areas, causing trouble. There was so much chaos that Russian pilots could not tell friend from foe, so they returned from many missions without discharging their weapons, and when they did fire they sometimes attacked their own men.

Already on Thursday Ukraine had regained the road hub of Balakliya, which was a key Russian objective on the first day of the war; Ukrainian troops raised their flag over the city hall and posted a moving video in which they address their President and say, "we have executed your order." And they are threatening much more. Ukrainian troops are taking losses but they seem to be thrilled to be moving forward after months of stasis; this video shows some crazy guys charging into a Russian-held town on their Humvee, heavy machine gun blazing. With that kind of force and momentum it will take a strong defensive position manned by brave soldiers to stop them, and so far there is no sign of such a defense in this area.

Some Russian bloggers are furious at local commanders, because the bloggers had been reporting a concentration of Ukrainian forces in this area for more than a week, but nothing was done to shore up the line. This makes me suspect that the line was not shored up because there were no troops to send. Not that Russia has no more men, but many are still tied up in the slow-moving Donbas offensive, which has taken less territory in the past month that Ukraine took over the past two days. Others are resting and refitting after six months of combat, and as I said a large force has been committed to the defense of Kherson in the south. 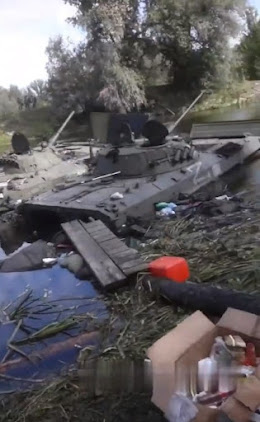 Russian Infantry Fighting Vehicles Abandoned
during the Retreat from Balakliya

To get an idea of the scale of the losses here, look at the Oryx lists of destroyed Russian vehicles for September 7 and 8, which total 18 tanks, 51 APCs, infantry fighting vehicles etc., 4 towed artillery pieces, 4 self-propelled 152 mm guns, 5 multiple rocket launchers, and 36 others. That's 2-3 battalions, wrecked. 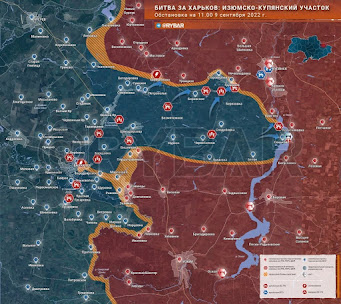 As of Friday morning some observers think the offensive is still rolling and the 10,000 Russian troops at Izium (a major hub with a corps headquarters and so on) are in real danger, and bloggers are frankly begging the Kremlin to send reinforcements. Russian MOD did put out a video showing one battalion of armored infantry on the move, saying they were headed toward Kupyansk, but there's no way to verify that and since Ukraine is said to have 7,000 troops in this offensive, that won't be nearly enough. The advancing forces are pumped up by overrunning one weak Russian position after another and from being cheered by the residents in every town. The map above comes from Rybar, a pro-Russian blogger with a pretty good reputation for accuracy, but it looks worse for Russia than any other map out there. If it is correct, Russian troops will have to abandon a lot more ground in a hurry to avoid capture.

This could end up being a major turning point in the war. It is a huge moral victory already, lifting Ukrainian spirits and showing their European backers that they can win.

LPR volunteer "Murz" thinks Urkaine's southern offensive will fail, but worries that the Russian leadership will believe their own reports that they have slaughtered Ukrainians and greatly weakened them and then order more suicidal attacks by under-armed and under-trained troops.

Russia has now lost at least 1,000 tanks in Ukraine since February 24, all visually confirmed.

Report from the Wagner Group-affiliated Grey Zone Telegram account on Ukrainian advances in the South.

In Kharkiv, a chimpanzee escaped from the zoo, but then it started to rain and the chimp ran to the keepers who were following it and "agreed to return to the zoo." Video here.

A Russian soldier describes what it's like to be an occupier of Kherson.

Putin seems to be betting that energy warfare will force Europe to abandon Ukraine, but this author doubts that will work. Partly this is because of the impact of Russia's war crimes; after seeing the pictures from Bucha and hearing the regular genocidal pronouncements on Russian television, European leaders are trapped and really cannot make a deal with Putin until he backs down in Ukraine. Plus, the Poles will starve and freeze before they make a deal with Russian invaders, and in the US we are doing fine, and that's really all that's needed to sustain aid to Ukraine.

Here's an interesting tweet: "Spent the day at a parking lot in Zaporizhia where Ukrainians who fled Russian-controlled territories make their first stop. One thing I did not expect: parents saying it's the prospect of their children having to study using Russian programs that finally convinced them to leave." People don't want to watch their children turned against them.

The US supplies Ukraine with the VAMPIRE missile system, which is designed to shoot down drones with missiles that don't cost far more than the drones they are fired at, a major problem with other systems.

MilitaryLand summary of the surprise Ukrainian offensive at Balakliya on September 6-7.

Long interview with a Ukrainian man who just escaped from a Russian-occupied area.

You might have heard that recruitment in the LPR is "scraping the bottom of the barrel;" here's what that means, and what happened when one of these unit found itself in the path of a Ukrainian offensive.

War and tradition: in the first six months of this year Ukraine registered a 21% increase in the number of marriages.