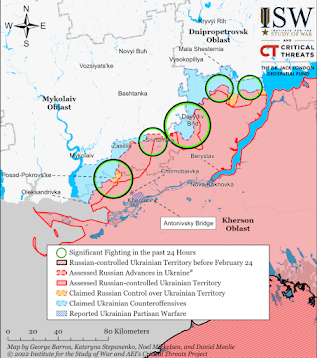 The NY Times is reporting, based on US military sources, that Vladimir Putin is interfering more and more in battlefield decisions in Ukraine, overruling his military commanders. In particular, this has included

rejecting requests from his commanders on the ground that they be allowed to retreat from the vital southern city of Kherson.

A withdrawal from Kherson would allow the Russian military to pull back across the Dnipro River in an orderly way, preserving its equipment and saving the lives of soldiers.

But such a retreat would be another humiliating public acknowledgment of Mr. Putin’s failure in the war, and would hand a second major victory to Ukraine in one month.

As you can see on the map above, Russia holds an area measuring about 250 by 80 km on the west bank of the Dnipro River, just north of Crimea. The Dnipro is a really big river. All the bridges over the river have been destroyed by Ukrainian missile attacks, so Russian supplies have to be carried across on barges. Opinions differ as to how bad the situation is for Russian troops on the west bank. Some observers think front line units regularly run out of ammunition and are ready to crack. On the other hand they have not cracked, and Ukraine's small gains in the region have come at a heavy price.

Some of the most insidery western sources are downright gleeful about the situation, so I guess US intelligence thinks things are bad for the Russians. I have seen a few bold predictions of a major impending victory for Ukraine. If Russian commanders have actually asked to withdraw, they must also be nervous.

Putin is not having it. In his defense you might note that his commanders have performed abysmally, so maybe he is wise not to trust them. But all the precedents here are bad for Russia; I'm sure every Russian officer knows what happened to Soviet troops frozen in place by Stalin's "not one step backward" orders in 1941-42.

The "mobiks" are being given a mere two weeks of training; they are being handed rifles so rusted through that many of them will detonate like grenades before firing a hundred rounds; they are drunk en masse now and will be just as drunk on the battlefield; they are a rabble, and they are destined to become fertilizer for Ukraine's fields and forests.

Putin seems more and more desperate and unhinged. Unlike Stalin, he doesn't have the benefit of his enemies having to contest with multiple fronts, nor the pressures of an air war, nor the difficulties of maintaining a complex military occupation across a massive region full of resistance fighters and saboteurs. There will never be an Invasion of Italy or a D-Day Landing to take pressure off his war front; there will never be a gradual destruction of his foe's war industry through strategic bombing; there will never be a steady collapse in the opposition's morale, because they are fighting to reclaim their own land rather than to push further and further into the frozen Russian backwaters; etc, etc.

I'd feel pity for the Russians being sent to the front as cannon fodder so senselessly, but for the most part they seem enthusiastic and thus don't deserve pity - they actively buy into the racist, imperialist nonsense of the Russian state; brainwashed by mass propaganda and the toxic, delusional culture of "Russkiy Mir".

The hideous irony of these imbeciles marching off to invade and annex their neighbor's land, shouting "но пасаран!" / "No pasarán!" / "They shall not pass!". Their heads are completely empty, and so it seems they sadly must get them filled with lead and shrapnel.