Electric Rickshaws and Scooters are Taking Over India 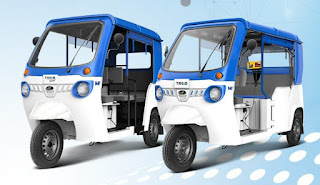 From the NY Times:

Indian automakers sold 430,000 electric vehicles in the 12 months that ended in March, more than three times as many as a year earlier. Most were two- and three-wheeled vehicles, with cars accounting for just 18,000, according to industry data.

If you search for "electric rickshaw" or "electric rickshaw India" what you get is not news articles but a vast array of slick ads from Indian companies. The picture above comes from one of them. In India this stopped being news two years ago and is now just business.

This points to one reason for environmental optimism. Some people say it won't matter how much Europeans and Americans limit their carbon emissions, because rising incomes in China, India, and Africa will increase their emissions so much as to overwhelm the planet. But that doesn't have to happen. In the long run solar power is simpler and cheaper than coal, and that is even more true in the tropics than in temperate latitudes. Solar can also be implemented on a village-by-village basis; in remote parts of Africa and India, beyind the reach of transmission lines, entrepreneurs have set up solar-powered charging stations for phones and other devices. They can do the same for e-scooters.

Nations without oil are moving agressively to put these measures into place, and the fact that electric vehicles now dominate the Indian rickshaw market shows that this can work.

Is recycling solar panels already both economical and easy? Otherwise we would just trae one problem for another.